That's one awesome achievement, eh?  I'm going to continue to write more, of course.  Cassie's story isn't done yet.  Heck, she just finished her sophomore year. xD And it took me 35,027 words to get her there... Now here's another treat for you to feast your eyes upon. 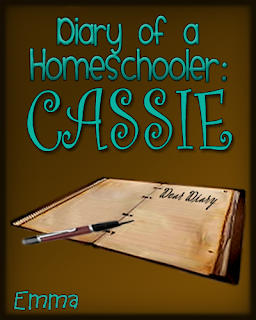 This is the lovely cover of my book, created by a terrific graphic-designing friend of my friend on a forum website.  Looks amazing, doesn't it?  I think I'm going to have to enlist this girl to create the covers for the rest of the Diary of a Homeschooler series!

Happy writing, and MERRY CHRISTMAS!  Emma is in a very good mood, and even though it's 10 minutes 'til 2 in the morning, I honestly doubt she will be able to sleep now. xD
Posted by Emma at 2:50 AM 8 comments:
Email ThisBlogThis!Share to TwitterShare to FacebookShare to Pinterest

I retract my "Ugh!!!"  I shortened my word count to 35,000 words, and now I have...like 940 words to write! :) I plan to hopefully extend my word count, if I finish those words way before November 30th, 11 PM.  I'm only going to finish DoaH, though.  That's more important to me.  Plus, I'm kind of frustrated with MDBC because it just will not be written.  Or be long enough to satisfy me.  Well, whatever.  If you're NaNo-writing, tell me if you've finished your word count already or tell me when you do!  Now off to go make a bagel... (I don't think I've spilled this secret yet: I absolutely adore bagels.  They're one of my most favorite foods in the whole world.  Whoever-would it be whomever?-I marry better like bagels. xD)
Posted by Emma at 11:50 PM No comments:
Email ThisBlogThis!Share to TwitterShare to FacebookShare to Pinterest

I absolutely abhor being behind on my NaNo books!  I have 7,580 words left in DoaH to write at the time that I'm typing this blog post, and there are just about three days left.  I didn't get enough time to write over Thanksgiving, and I'm working double time to even meet my NaNo goal.  I'm considering lowering it to 35,000...can I still do that?  I'll go check momentarily.  If I can, that'll take a huge weight off my chest.  If not, I'm still going to try and finish the 40,000 words by November 30th.  Cassie would thank me, I think.  The book isn't close to done, though, but I can still win.  I'm praying that I can finish.  This is something so major to me.  Good luck to all other NaNoWriMo writers! :)
Posted by Emma at 12:04 AM 2 comments:
Email ThisBlogThis!Share to TwitterShare to FacebookShare to Pinterest

﻿Guys, check out who just commented on my blog!  I think this calls for a celebration! *does a happy-dance, then blushes when Mom gives me a weird look* Check for the celebratory post coming this weekend! ;)
Posted by Emma at 11:48 AM 4 comments:
Email ThisBlogThis!Share to TwitterShare to FacebookShare to Pinterest

The problem with Cassie and her blog is that her blog has to be written in MODERN time.  Whereas, with her book, I'm already into 2012.  And I'm only halfway done, so I really should be starting her junior year of high school.  Yet, I'm only in her freshmen year.  Not cool.  "Write faster, Emma!" I tell myself.  Easier said than done.  I definitely need to work on my techniques on putting bigger gaps in between each entry.  There's just so much going on in her life right now, though!

Want a little spoiler for DoaH?  Cassie's mom starts dating again, and Cassie absolutely abhors the guy.  She has this feeling that's he's not what he seems to be, and she just might be right....
Posted by Emma at 11:27 PM 1 comment:
Email ThisBlogThis!Share to TwitterShare to FacebookShare to Pinterest

So, it's the second weekend of NaNoWriMo!  I should be about halfway through my book by now.... I'm not. :P In neither of my books.  I'm going to give a word count update as of this moment (it's going to change by later tonight) and the summaries of both books that I have on the NaNo sites! :)

Cassie Thompson figured her life would go from average to dull when she moved back to Virginia and her mom decided to homeschool her. But life has a way of taking interesting turns... With only the ears of her diary and BFF from back in Iowa, Cassie manages to struggle through her high school years. But everything isn't always rosy, of course.
The Mother-Daughter Book Club Fanfiction Two (official title will not be revealed) Word count update: 18,532 words
~~~~~~~~~~~~~~~~~~~~~~~~~~~~~~~~~~~~~~~~~~~~~~~~~~~~~~~~~~~~~~~~~~
It's year two of the second generation book club, and the four older girls are officially in high school now! After much discussion, a few of Shannon Hale's books are decided on for the year of reading. But not everything is fun and books for Jane, Violet, Natalie, Kelsey, and Kiely. Jane's relationship with Christopher is blossoming, and there's fall play drama for Vi. But that drama stems from Natalie's ex-friend, Julia Kent, who is also causing problems for Natalie. Kiely's organization is taking off, but Kelsey has the worst luck-two major catastrophes. Will the book club's bonds grow closer, or will the club split apart?
BTW, Jane is Emma's daughter, Violet is Jess's daughter, Natalie is Cassidy's daughter, Kelsey is Megan's daughter, and Kiely is Becca's daughter.
Hope you enjoyed these small looks at my books!
Posted by Emma at 8:59 PM 10 comments:
Email ThisBlogThis!Share to TwitterShare to FacebookShare to Pinterest

Good morning, fellow NaNo writers! (And good morning to my blog readers who aren't writers, as well.)  I thought I would update y'all on how I'm doing on my word count goals.  For the YWP NaNo, my goal is 40,000 words, although I'll hopefully get more. ;) Currently, for that book, I have 10,273 words.  So, 1/4 of the way there.  For regular NaNo, my goal has to be 50,000 words.  For that book, I've typed 13,638 words, but I have more than that on paper that I still need to add to the computer version.  I haven't even written in that book in several days because I've been too busy typing it all up!

So, wanna update me on how your NaNo writing is coming? :) If any of you want to become a NaNo writing buddy, you can always find me on the YWP NaNo. ;) I'm MDBCnumber1fan, and I post around the homeschoolers' forum a ton. ;) That's all for this rainy (bluck) day.
Posted by Emma at 11:34 AM 4 comments:
Email ThisBlogThis!Share to TwitterShare to FacebookShare to Pinterest

Okay, so I have something to confess.  Writing on a tight schedule, especially with schoolwork, is hard.  You'd think the ideas would just flow out of my mind and onto the computer screen.  Ha!  I wish.  Fellow writers can probably commiserate.  I also found out this week that Romeo and Juliet isn't as good as I hoped.  Also, forgetting about your biology test until the day before it's due is never a good idea.  I might also mention that I've done very little homework for my study skills class....... Hey!  I got busy with NaNoWriMo, reading Romeo and Juliet, and other schoolwork!  The sad thing is, it's probably helped that my IMing bestie is busy with a CYT show, and so she's never on to chat.  Ah, well.  Thus the life of a future author!
Posted by Emma at 7:29 PM 2 comments:
Email ThisBlogThis!Share to TwitterShare to FacebookShare to Pinterest

There You Have It!

My special surprise?  A new blog!  This one by a very special girl.  She's going to be my main sidekick during NaNoWriMo.  After all, she's the main feature of my YWP NaNo book Diary of a Homeschooler: Cassie!  I've already started writing a bit about her (shh!), and it feels awesome to have a) a homeschooled character and b) someone who lives in my birth state of V.I.R.G.I.N.I.A!  In case you're all interested in reading her blog, here's the link. ;) All right, off to go wait for another half hour.  It's kind of agonizing, LOL!

http://virginiahomeschooler.blogspot.com/
Posted by Emma at 12:30 AM No comments:
Email ThisBlogThis!Share to TwitterShare to FacebookShare to Pinterest
Newer Posts Older Posts Home
Subscribe to: Posts (Atom)