Hi, everyone! I got back from Quebec Saturday evening after twelve hours of travel. :P I've been slowly unpacking the last couple of days, but now I have pictures and stories to share with y'all. In this post, I'll cover Saturday the 15th through Tuesday the 18th, and then in a few weeks, I'll cover Wednesday through Friday.

July 15th
Woke up before 4 a.m. to catch our first flight. We had a layover in Chicago and then flew into Montreal. Our cab ride to our hotel took much longer than expected, so we had to adjust our plans for that evening. We ended up walking down to the river since it was only a few blocks from our hotel and then we had crepes for dinner and returned to the river once again because there were fireworks that night. It was a great welcome to Montreal. 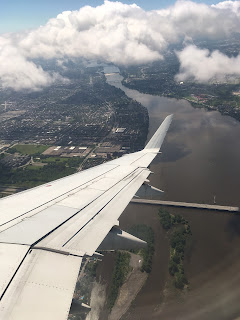 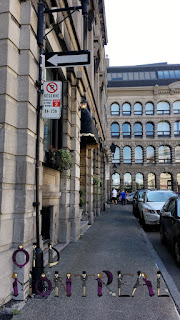 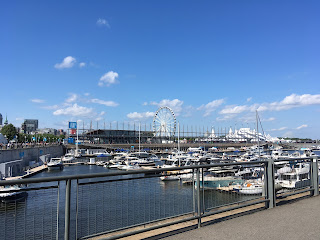 The Saint Lawrence River and the Old Port.

July 16th
My birthday! We got up, got breakfast at Starbucks (since we needed to get moving earlier than most cafes were open on a Sunday), and then took the metro up to the botanical gardens. Sidebar: the Montreal metro system was so easy to navigate. Loved it!
Anyways, we spent a couple hours at the botanical gardens, ate there, and then went to the Olympic Stadium. We went up in the observation tower, and my dad took a tour of the stadium, but my feet were really hurting by then (I was wearing shoes I'd had forever, but they were giving me blisters for some reason). Then we returned to the hotel and cleaned up for our fancy dinner that night. 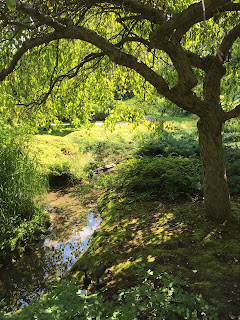 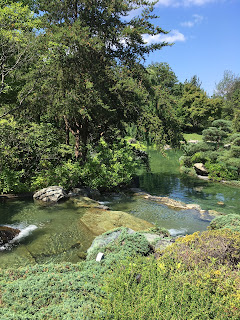 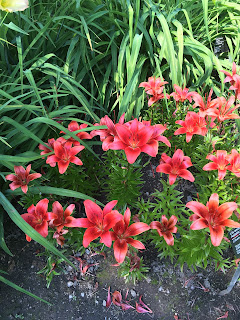 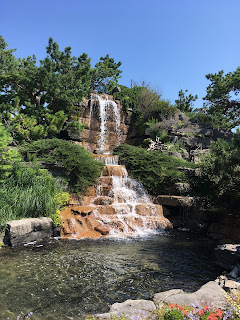 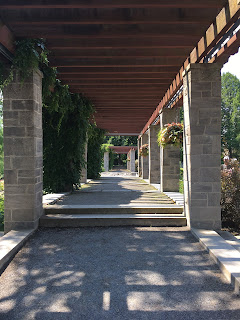 The botanical gardens were so pretty! That top picture is probably one of my favorites that I took on this trip. 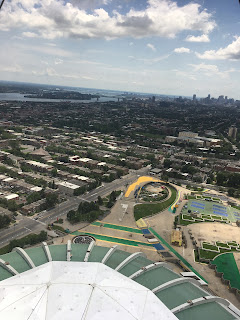 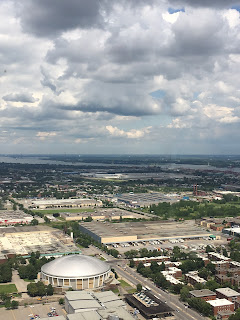 Views from the observation tower at the stadium. 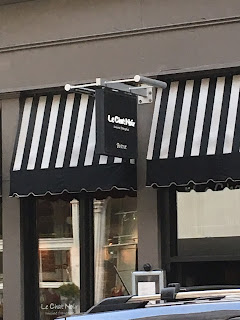 If you can't read the sign, it says Le Chat Noir, which I only partially chose because of Miraculous: The Tales of Ladybug and Chat Noir.

July 17th
We started the day with breakfast in a cafe (I ordered chocolat chaud, of course) and then took the metro over to the Montreal Museum of Fine Arts. They had several paintings I added to my Pinterest board of art I like, and they had a whole building devoted to Canadian artists. Then we took the metro to the Plateau Mont-Royal neighborhood where we walked through the rain to La Banquise. There we got our first try of poutine. After that, we found the bus that would take us up Mont Royal, although we missed our stop and had to ride the bus until it circled back around. The views were great from the mountain. Once we came back down, we stopped by a bookstore called Renaud Bray, and I got four YA books in French (although I had to leave Crooked Kingdom and Snow Like Ashes behind D: ). After that, we returned to Old Montreal and ended up going to the crepe place again, mainly so we could order dessert crepes. 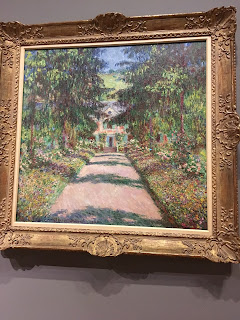 Monet can be found even in Montreal. This piece is titled "Main Path at Giverny." 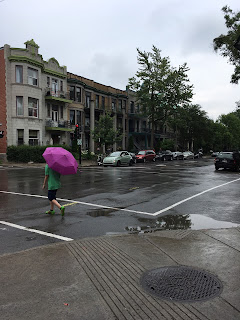 Plateau Mont-Royal was so artsy and lovely. 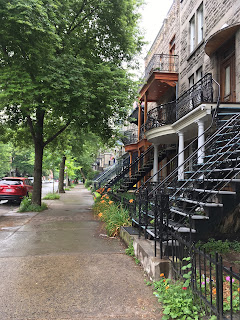 Look at those staircases! 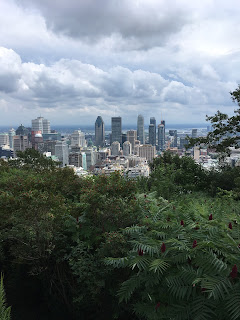 The city from the mountain. 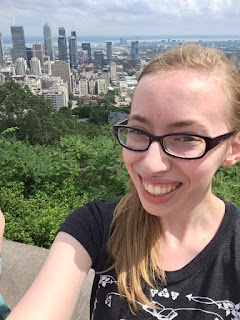 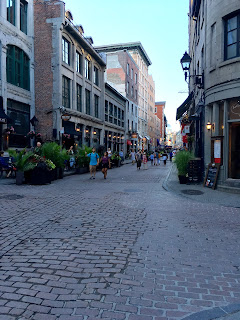 The oldest street in Montreal.

July 18th
Our hotel was right next to the Notre-Dame Basilica, so we got up early and toured that to beat the crowds and lines. It was gorgeous inside, although it was dim enough that pictures didn't turn out super well. Then we took the metro down to Marche Atwater, a mostly-open air market. Oh man, if I lived in Montreal, I'd go there every other day. We got berries for lunch and to take back to our hotel, we ate sandwiches, and we got a bunch of pastries to take back to the hotel as well. I got a pear tart that was absolutely delicious (although it was probably only my second favorite pastry of the trip; you'll have to wait for part two of this post series to find out why). In the afternoon, we walked down to City Hall and Chateau Ramezay, a history museum. After that, we went to Pointe-a-Calliere, which is a history/archaeological museum. Finally, we finished the night with dinner at a Polish restaurant, which was wonderful. 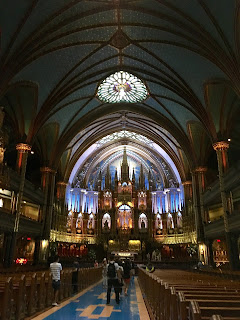 Look at that architecture! 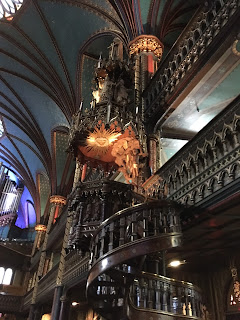 I loved the staircase off to one side in the basilica. 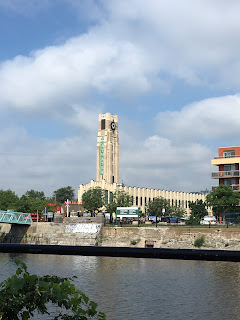 Across the canal from the market. 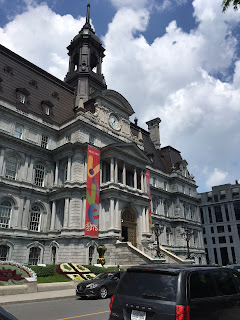 City Hall. Oh, and that sign is celebrating the 375th anniversary of Montreal's founding. It's also Canada's 150th birthday this year. 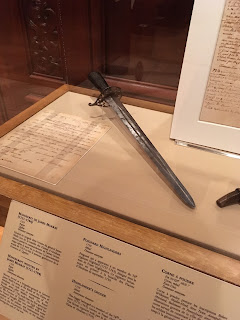 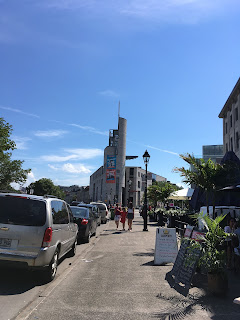 That's Pointe-a-Calliere. The shape of the entrance building to the museum is so cool. 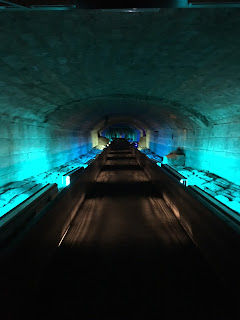 Part of the museum is in the old sewers, and I loved walking through there. 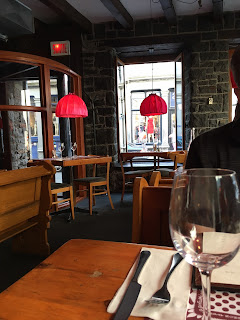 The Polish restaurant was so cute, and I got to try my first pierogi!

Have you been to Montreal? Or Quebec? What was your favorite part?
Posted by Emma at 12:00 AM
Email ThisBlogThis!Share to TwitterShare to FacebookShare to Pinterest