Review: This Is How It Happened 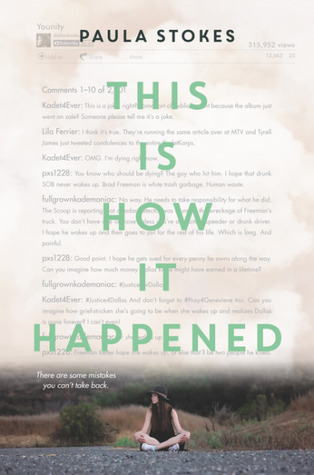 This Is How It Happened by Paula Stokes
Grade: C+
An ARC was provided by the author in exchange for an honest review.
Summary: When Genevieve Grace wakes up from a coma, she can’t remember the car crash that injured her and killed her boyfriend Dallas, a YouTube star who had just released his first album. Genevieve knows she was there, and that there was another driver, a man named Brad Freeman, who everyone assumes is guilty. But as she slowly pieces together the night of the accident, Genevieve is hit with a sickening sense of dread—that maybe she had something to do with what happened.
As the internet rages against Brad Freeman, condemning him in a brutal trial by social media, Genevieve escapes to her father’s house, where she can hide from reporters and spend the summer volunteering in beautiful Zion National Park. But she quickly realizes that she can’t run away from the accident, or the terrible aftermath of it all.
Incredibly thought-provoking and beautifully told, Paula Stokes’s story will compel readers to examine the consequences of making mistakes in a world where the internet is always watching…and judging.


The Good, the Bad, and the Ugly: This Is How It Happened surprised me. It definitely hasn't had a lot of buzz, and it also wasn't Paula's original planned 2017 book. But I've enjoyed a few of Paula's past books (Girl Against the Universe is excellent, in case you were wondering), so of course this one was on my TBR list. But ultimately, it did not live up to Paula's other books.
I really enjoyed Genevieve and her inner narrative. While she interacts with plenty of people in the book, she is also alone with her thoughts a lot. I appreciate introspective books, and I love how seeing the beauty of Zion National Park made her second-guess her religious assumptions. I also appreciated how her relationship with her stepmother flourished and how kind Rachael was. I also liked where the plot went with Brad Freeman. I liked how Stokes played with first impressions and truth.
However, one of the book's biggest issues was its pacing. It took over 100 pages for Genevieve to get to her dad's house and the national park, and I assumed that would be where all but a teeny bit of the book was set. The first 1/3 of the book dragged too much as a result. I also felt like Dallas was too two-dimensional. Since he was only in (largely negative) flashback scenes, I didn't really see why he had made such an impact on Genevieve's life, so it didn't feel too fast to me when she started getting involved with Elliott (although I wish that had been slowed down just a teeny bit more). Freeman's daughter really pissed me off, though; she was waaayyyy too mouthy and her parents did nothing to rein her in a bit. Considering she was only thirteen, she definitely should've been reprimanded.
Maybe a dozen s-words? Underage drinking happens (although Genevieve never participates).

The Verdict: Eh, it was okay. Nothing especially remarkable though.

Buy: Read Between the Lynes  Barnes & Noble
Will I be adding this book to my library?: Hmm...possibly.
Posted by Emma at 12:00 AM
Email ThisBlogThis!Share to TwitterShare to FacebookShare to Pinterest