More books, yay!  My only problem is that I'm going through my self-made "summer reading list" in about two weeks.  And it's not even June yet, let alone summer! 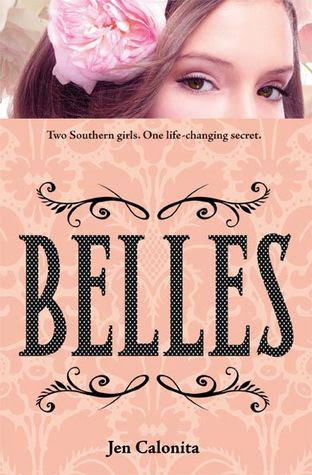 Belles by Jen Calonita
Grade: A-
Summary: Fifteen-year-old Isabelle Scott loves her life by the boardwalk on the supposed wrong side of the tracks in North Carolina. But when tragedy strikes, a social worker sends her to live with a long-lost uncle and his preppy privileged family. Isabelle is taken away from everything she's ever known, and, unfortunately, inserting her into the glamorous lifestyle of Emerald Cove doesn't go so well. Her cousin Mirabelle Monroe isn't thrilled to share her life with an outsider, and, in addition to dealing with all the rumors and backstabbing that lurk beneath their classmates' Southern charm, a secret is unfolding that will change both girls' lives forever.

The Good: The setting, which I LOVED.  I'm a Southern girl at heart (*cough*SouthernGirlKitchen*cough*), and I love the thought of Southern belles, accents, chivalry, and what-not.  I really liked how Mirabelle grew as a character (in this book and the two others in the trilogy).  I was hesitant to like her, but she grew on me.  Hayden and Kellan were good characters, too.  I liked that both the Monroe parents were present.  That seems to be more common in YA books these days, which I like.  It wasn't so long that parents were absent (dead, an alcoholic, ran away, etc.).

The Bad: First off, I HATED how Hayden and Brayden's names are so similar.  It's not that hard to prevent that from happening.  I've seen some complaints about Isabelle and Mirabelle having similar names, but I liked it with them.  The whole "belles" thing.  Plus, they usually went by Iz or Izzie and Mira.  What else...oh, yes.  I would've liked a bit more of that Southern charm feel, you know?  Sure, there can be mean girls but I wanted to see more who practiced those good Southern manners.  I also don't feel like Isabelle grew as a character so much.  If a book isn't action-packed and action-driven, it needs to be character-driven.

The Ugly: I don't recall any bad language.  The romance stayed fairly chaste. 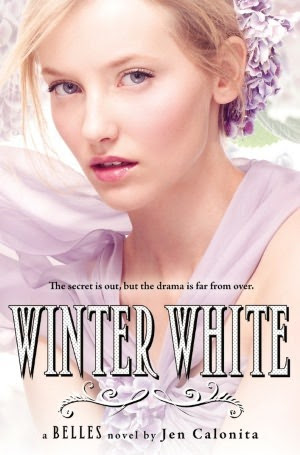 Winter White by Jen Calonita
Grade: A
Summary: Isabelle Scott and Mirabelle Monroe are still reeling from the revelation that they share more than just the roof over their heads. The media has pounced on their story, and while Izzie and Mira have each put on a happy public face, someone is leaking their true feelings to the press. It seems as if the world is watching their every move, but at least the girls have each other.
With cotillion season right around the corner, however, Izzie and Mira have barely had time to process their newfound sisterhood. Mira has dreamed of making her debut in a gorgeous white gown forever--now if only she had an escort... Izzie, meanwhile, is still struggling to find her place in Emerald Cove, which seems ever more impossible with EC mean girls, young and old, trying to keep her down. As cotillion preparations heat up, there are dance steps to learn, manners to perfect... and secret initiations to complete?It's time for the gowns to go on and the gloves to come off.

The Good: There's a cotillion.  A cotillion.  Ignore my girlish squeals.  I think I truly am a Southern belle at heart.  I liked how Mirabelle-and this time, Isabelle-got character development.  I enjoyed the ending.  Christmas!  Okay, now I'm just spazzing over random things that make me happy.

The Bad: Ugh, if I could, I'd rant about how annoying I find Brayden.  Seriously, he's one of the worst characters I've ever seen.  I wasn't a fan of Dylan or Kylie either (Kylie is even worse in the next book).  I kept thinking Dylan was in cahoots with Savannah, to be honest.  Also, *SPOILER ALERT* I'm getting tired of traitors.  Lucas in book one, Callista in this one.  Especially because I really like Callista and thought she was a good person!  Jen Calonita seems to love her mean girls and traitors, that's for sure. *END SPOILER*

The Ugly: Same as with Belles.  Not any bad language that I can remember, and making out is as bad as it gets. Although there is a character who was born out of wedlock, so what's implied there isn't great. 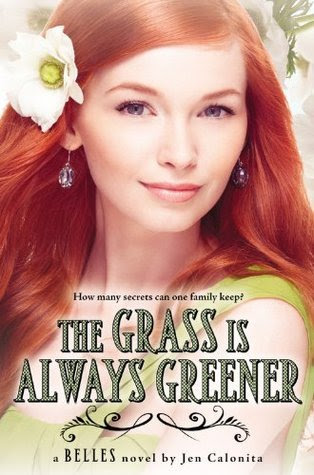 The Grass Is Always Greener by Jen Calonita
Grade: B+
Summary: How many secrets can one family keep?
Amid preparations for Emerald Cove's extravagant Founders Day celebration and their own shared sweet sixteen, Isabelle Scott and Mirabelle Monroe are longing to break free from the tight constraints that come with being the daughters of a prominent public figure. When Izzie's estranged aunt, Zoe, breezes into town, the already uneasy family dynamic is turned on its head.Izzie's finally found her footing in Emerald Cove by leading the Social Butterflies, her school's prestigious club, and she has no interest in getting to know yet another long-lost family member. But Mira, who's on a mission to try new things and make new friends, is drawn to Izzie's artsy aunt. And when Mira meets a handsome, brooding painter, her entire perspective on life begins to shift.As tensions mount in Emerald Cove, Zoe's laid-back attitude appeals to both girls. But when she offers Izzie the chance of a lifetime, it's time to make a tough decision. What's more important: family or freedom?

The Good: I love how the Monroes and Isabelle feel more like a family in this book.  And when Izzie blatantly disobeyed Bill and Maureen, they punished her.  At first I was like, "Oh, c'mon!" And then I was like, "Wait a minute...what Izzie did was seriously wrong.  Yay for parental discipline!"  Character development in this book...Mira didn't grow so much now that I think about it, but she had Belles and Winter White to mature.  I think Izzie really grew up in this book.  And the conflict with Zoe was good.

The Bad: Brayden is still around, blah. :P And Kylie?  Oh my gosh, I do not like that girl.  I didn't like Violet's actions in this book, either, for that matter.  I kept thinking, "Seriously, girls, GROW UP."  I don't feel like my friends and I ever act that catty and immature. (Sometimes we get crazy and goofy immature, but not bratty, toddler-esque immature.)  Finally, I'm not sure how I felt about the ending...it didn't give me the right closure, overall, I guess.  This was the last book in the Belles series, right?  Oh, and a recommendation to all authors - fancy font is a great representation of handwriting, but it should be READABLE.  There was a letter from Isabelle's grandmother towards the end of the book, and I really struggled to follow it completely.

The Ugly: Same as the other books.  I also didn't find Zoe to be a good role model, and I'm concerned the author excused her actions too much.

Overall, this series is definitely something I recommend.  I loved the twists and the characters.  It just needed a bit more Southern flavor.
Posted by Emma at 11:50 AM
Email ThisBlogThis!Share to TwitterShare to FacebookShare to Pinterest