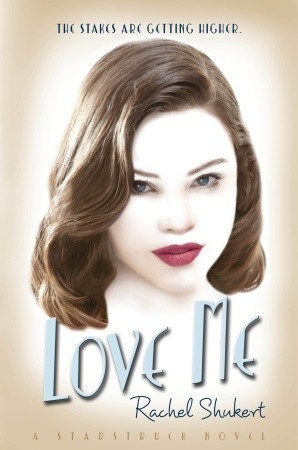 Love Me by Rachel Shukert
Grade: C+
Release date: February 11, 2014
I received this e-galley from NetGalley and Delacorte BFYR in exchange for an honest review.
Summary: Amanda is heartbroken. She's tried, but she can't get over her breakup with hotshot writer Harry Gordon. If only she could talk to him, she could convince him that their love story is bigger than any screenplay. But Amanda isn't the only one in Hollywood keeping a secret—Harry's got one too.
Margo has to pinch herself: there's talk of her getting an Oscar nom for her first film role, and she's living with the Dane Forrest, the gorgeous movie star millions—including herself—swoon over. But if the public finds out about their domestic arrangement, her career will be over. The studio has a plan to fix it all . . . but is Margo prepared to pay the price?
Gabby's drinking is out of control, but who cares? She's bored and depressed. She needs someone who will treat her like the woman she is beneath the silly stage costumes and pigtails. And she's sure unpredictable musician Eddie Sharp is The One. But playing with bad boys like Eddie isn't for little girls...


The Good: I appreciated how Margo seemed to grow from Starstruck.  I still love the glamour and the setting.  It was fun to see historical references like Disney's Snow White and the Seven Dwarfs and foreshadowing of the Blue Fairy in Pinocchio.  There were several mentions of Gone With the Wind and its stars.  The inclusion of the Oscars was awesome.  It was fun to see how it was once run.  I enjoyed how Gabby found her place in music.  There's a scene with Margo and another character towards the very end that I liked.  If I remember correctly, I had guessed the truth after reading Starstruck.

The Bad: Too many of the characters rubbed me the wrong way.  Their bad choices were brushed aside as if they didn't matter.  Some were too melodramatic or stupid, and others were downright cruel without reason.  Harry drove me mad because he was a wishy-washy jerk.  Diana Chesterfield also makes a reappearance that left a foul taste in my mouth because it wasn't handled well.  I also felt like Dane and Margo's storyline needed more resolution.  I'm sort of assuming there's going to be a third book, but their storyline needed resolution in Love Me.

The Ugly: Language was pretty tame.  There were several romantic implications (mistresses, "escorts," sleeping together, and so forth).  All of the main characters drink heavily.  A couple do drugs, and Gabby gets addicted to marijuana.

The Verdict: Honestly, it wasn't a fabulous read.  It was intriguing and I wanted to keep reading, but there were too many turn-offs.
Posted by Emma at 9:00 AM
Email ThisBlogThis!Share to TwitterShare to FacebookShare to Pinterest