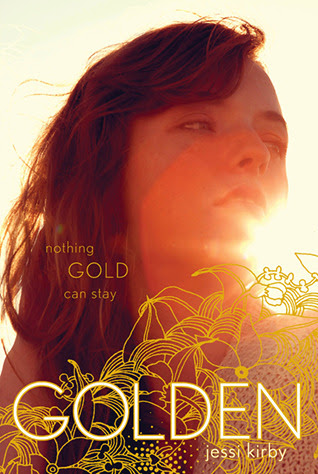 (First off, if I could feature about five books per Cover Love, this one would've made it last week.  I feel it really embraces the nature of the book.  It's even more beautiful in person so this is a book you need to buy or check out from the library.)

Golden by Jessi Kirby
Grade: B
Summary: Seventeen-year-old Parker Frost has never taken the road less traveled. Valedictorian and quintessential good girl, she’s about to graduate high school without ever having kissed her crush or broken the rules. So when fate drops a clue in her lap—one that might be the key to unraveling a town mystery—she decides to take a chance.
Julianna Farnetti and Shane Cruz are remembered as the golden couple of Summit Lakes High—perfect in every way, meant to be together forever. But Julianna’s journal tells a different story—one of doubts about Shane and a forbidden romance with an older, artistic guy. These are the secrets that were swept away with her the night that Shane’s jeep plunged into an icy river, leaving behind a grieving town and no bodies to bury.Reading Julianna’s journal gives Parker the courage to start to really live—and it also gives her reasons to question what really happened the night of the accident. Armed with clues from the past, Parker enlists the help of her best friend, Kat, and Trevor, her longtime crush, to track down some leads. The mystery ends up taking Parker places that she never could have imagined. And she soon finds that taking the road less traveled makes all the difference.

The Good: Overall, I found the characters to be very strong, well-developed, and unique. Their personalities shone through.  The plot is very cool.  I loved how everything started with the journals, and how Julianna and Shane's story was a true mystery.  There was one point I was all like, "Oh my gosh, I wonder if ______ is _______!" And I was right.  I'm not the best detective, but Jessi Kirby didn't make it too hard to put the pieces together.  Which isn't a bad thing.  When there's a mystery involved, you have to give your readers little tidbits to keep them reading and wanting more.
I also liked how poetry was involved, how each chapter started with a little line from something.

The Bad: Shane was one of the underdeveloped characters.  I know we didn't actually meet him, but still.  He seemed too stereotypical, the most popular boy at school who loves his girlfriend but seems to care more about his team and his family's wishes.  Yes, friends and family are important and shouldn't be ignored when you're in a relationship.  But your significant other doesn't deserve to be treated like Julianna was towards the end.  I also think there was a bit missing with Julianna's journal entries.  They started awfully late in the year (or maybe I overlooked where Parker skipped ahead to read?), and everything happened a bit too quickly for her.  Finally, I wasn't a big fan of the romance in Parker's life.  It felt off to me, and while I usually root for the main character and her romantic interest, I couldn't this time.

The Ugly: The main thing that comes to mind is the language.  The s-word was used at least five times I could recall, and then the f-bomb was dropped twice within the same paragraph (I'm fairly certain that was the only time, though.)  Romance is high school level.  Nothing too inappropriate.

I liked Golden.  The good outweighs the bad, but it doesn't outweigh the ugly.  I'm definitely going to have to take into consideration if I'll buy this book or not.

1. Wow, 30,000 pageviews!  Thanks to everyone who has stopped by my blog.  I really appreciate it, and I hope you'll keep visiting. :)
2. As you might notice, new blog layout!  This is so y'all can see my TBR list (on the lefthand side). I'll try to update it as often as I can, but that list will just keep growing (there's even some books I didn't list), and I devour books, so it'll take some time to remove them.

I think that's everything!  Have a nice day, everyone. :)
Posted by Emma at 3:49 PM
Email ThisBlogThis!Share to TwitterShare to FacebookShare to Pinterest