House of Hades by Rick Riordan-10/8/13
We've been left on a literal cliffhanger for a year.  I've waited long enough. :P

The Captive Maiden by Melanie Dickerson-10/22/13
Cinderella mixed with Ivanhoe.  An historical retelling of a fairytale with Christianity beautifully woven in so it's not cliche.  I just hope the release date doesn't get pushed back, like The Fairest Beauty's was.

Allegiant by Veronica Roth-10/22/13
I'm just glad I was late to the Divergent fandom so my wait hasn't been as long.  But in the few short months since I read Insurgent, I've been dying.  That cliffhanger...I feel like it's driving me crazy!

The Naturals by Jennifer Lynn Barnes-11/5/13
I think I heard about this book on Twitter, and I've anxiously been awaiting it, in hopes that it'll be good.

Relic by Heather Terrell-10/29/13
Okay, technically, I've already read this, but I need to reread it again before I review it.  But I was definitely looking forward to reading it, and I wasn't disappointed.  My only complaint at the moment-the synopsis says it's for fans of Game of Thrones and The Hunger Games.  I hate it when synopses do that. 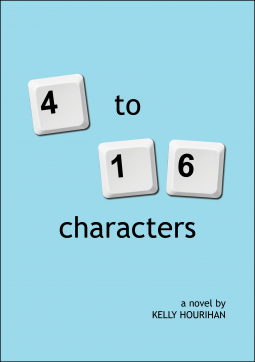 4 to 16 Characters by Kelly Hourihan-11/7/13
I found this book on NetGalley, and I've already sent it to my Kindle app.  The whole concept has me intrigued (although the cover is a bit lacking), so I hope it's as good as it seems.  It's definitely a book I want to give a try.

Seraphina by Rachel Hartman - already released
So I've heard good things about Seraphina.  It's in my stack of library books at home, and I plan to read it soon!

The Testing by Joelle Charbonneau - already released
I saw The Testing on the shelf at my local bookstore and decided to give it a try.  It, too, is in my library stack, so hopefully I'll get to it soon, in between all the new books, all the other library books, the ARCs, and the 5 million rereads.
Posted by Emma at 1:30 AM
Email ThisBlogThis!Share to TwitterShare to FacebookShare to Pinterest