Happy New Year, everyone!  2013 was an amazing year on my blog, and I'm really looking forward to what 2014 holds.

This post is mainly to review my reading and blog habits from 2013.  To help me out, I have pie charts. (Idea courtesy of Shae.) 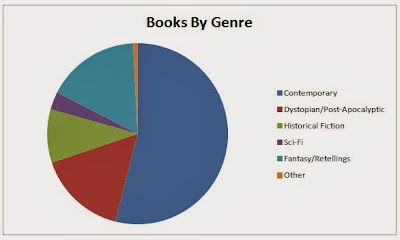 So, obviously I read the most contemporary (68 books to be exact), and then fantasy/retellings and dystopian/post-apocalyptic are almost tied for second. 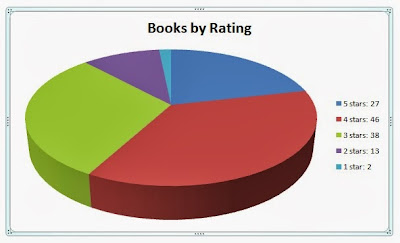 As you can see by the numbers, I gave the most books 4 stars, but 3-star books are pretty close behind.  In 2014, I hope to keep 4 stars at the highest, but maybe also increase the books I thought deserved 5 stars.

In other interesting stats, this was the first year I started reviewing books.  I reviewed 36 books this year!  Next year, that number should at least double since I didn't start until halfway through 2013.  I also hope to do more than one review a week, but we'll see if that's possible.  I'm going to keep on doing Top Ten Tuesdays and Random Fridays, and I want to do more discussion posts as well.

I'm also proud to say that my interview with Heather Vogel Frederick from back in July got the most views of ALL TIME on my blog.  And my post about college visits back in April has the second most views of all time.  This month, my Top Ten Tuesday about 2014 releases was fairly popular.

This year, I did four interviews: one with an author, one with a book blogger, one with a...I guess you could call her a bow maker?, and one with five book characters.  In 2014, I'd love to interview more authors and fellow book bloggers.

I also had two giveaways: one for bows, which was very popular, and another for an ARC that I just mailed to the winner on Friday.  I definitely want to host more giveaways in 2014, so we'll see how that goes.

Thank you to everyone who's read and followed my blog in 2013.  You really made it an amazing year.  Meeting so many people in the book blogging community has been fantastic.  Here's to an awkwordly wonderful 2014! :)
Posted by Emma at 2:00 AM
Email ThisBlogThis!Share to TwitterShare to FacebookShare to Pinterest