Review: More to the Story 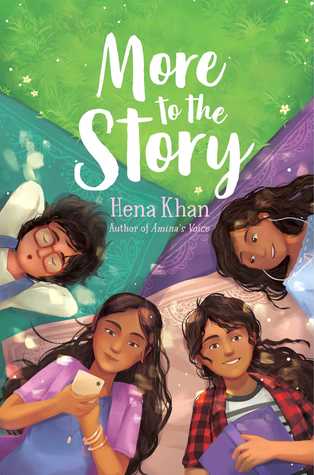 More to the Story by Hena Khan
Grade: B-
Release date: September 3, 2019
An e-galley was provided by Salaam Reads/Simon & Schuster via NetGalley in exchange for an honest review.
Summary: From the critically acclaimed author of Amina’s Voice comes a new story inspired by Louisa May Alcott’s beloved classic, Little Women, featuring four sisters from a modern American Muslim family living in Georgia.
When Jameela Mirza is picked to be feature editor of her middle school newspaper, she’s one step closer to being an award-winning journalist like her late grandfather. The problem is her editor-in-chief keeps shooting down her article ideas. Jameela’s assigned to write about the new boy in school, who has a cool British accent but doesn’t share much, and wonders how she’ll make his story gripping enough to enter into a national media contest.
Jameela, along with her three sisters, is devastated when their father needs to take a job overseas, away from their cozy Georgia home for six months. Missing him makes Jameela determined to write an epic article—one to make her dad extra proud. But when her younger sister gets seriously ill, Jameela’s world turns upside down. And as her hunger for fame looks like it might cost her a blossoming friendship, Jameela questions what matters most, and whether she’s cut out to be a journalist at all...

The Good, the Bad, and the Ugly: After loving Khan's Amina's Voice, I was super excited to hear she was remixing Little Women. There haven't been enough retellings of LW (although there have been plenty of film adaptations lately). The Mirza girls are all a bit younger than their LW counterparts, but they all clearly correspond to certain sisters, and then Ali arrives to be their Laurie. I liked how Meg became Maryam, and how she still seemed the same but translated to a modern setting. Jameela (Jo) was a great protagonist, and I thought it was a great idea to have her want to be a journalist - still a writer but a slightly different medium that connected her to her grandfather and family history, though perhaps that could've been emphasized a bit better. If More to the Story had been YA, I think it would've been explored further. Aleeza (Amy) seemed a bit younger than the age she was supposed to be (nine, I think?). Granted, I haven't been around any nine-year-olds lately but she read more like a six-year-old. I think MttS is definitely a character-centric book, but I think the different plots could've been stronger at times. I really liked Jameela's plot with Travis and the newspaper, though. She learned how to compromise but also how her vision could still be accomplished.

The Verdict: Great for a middle grade audience.