For All the Gallagher Girls

Last night was quite possibly one of the best nights of my life.  I got to meet Ally Carter.  She is amazing in so many ways.  She's hilarious, entertaining, beautiful, nice, and just amazing.  There were people in line who'd brought their whole collection of her books, and she didn't complain even once about signing all of them, although her hand is surely aching by now. (I personally brought Heist Society and Uncommon Criminals, along with buying United We Spy from the store.) 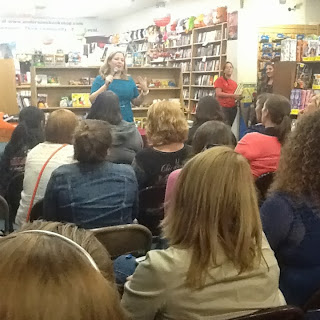 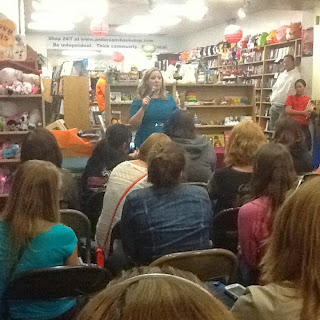 She answered tons of questions.  Inevitably, someone asked her for her advice about writing, and that answer was totally my favorite.


I asked her about Embassy Row, and she told us some fun stuff I hadn't heard on Twitter.  I'm really excited for her new series.  It sounds spectacular.  By the way, there are downsides to following Ally on Twitter because I already knew the answers to three-fourths of the questions people came up with.

Kate and I were numbers 44 and 45, so we had to wait a bit to get our books signed.  I didn't mind at all, especially because we got Gallagher Girl notebooks.  There were only 15 of them, and if we hadn't been standing where we were, we wouldn't have gotten them. (I think that notebook is going to be my new writer's notebook, just saying.)

When I finally got up to the table, I told Ally her dress was pretty (it seriously was) and gave her the card I'd made.  I told her I'm a writer, albeit unpublished, and she asked me a couple questions.  Then we posed for a picture. (Kate's mom actually took several.) 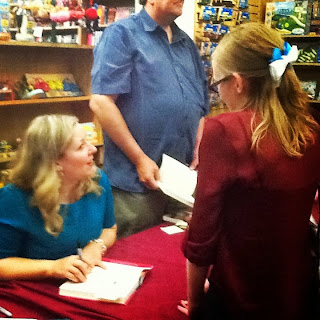 The way we're looking at each other in this one is awesome. 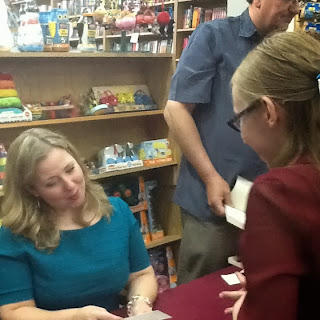 You can see how excited I was, just by my profile.  I was meeting Ally Carter, for goodness' sake.

I'm still sort of in disbelief that last night happened.  I hope I can meet Ally again at a future signing (for Embassy Row, maybe?).
Posted by Emma at 12:11 PM
Email ThisBlogThis!Share to TwitterShare to FacebookShare to Pinterest