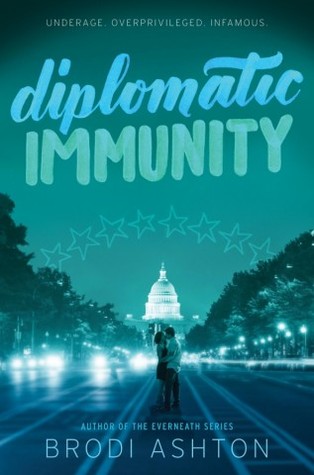 Diplomatic Immunity by Brodi Ashton
Grade: C-
An ARC was provided by the publisher via ALA in exchange for an honest review.
Summary: Piper Baird has always dreamed of becoming a journalist. So when she scores a scholarship to exclusive Chiswick Academy in Washington, DC, she knows it’s her big opportunity. Chiswick offers the country’s most competitive prize for teen journalists—the Bennington scholarship—and winning will ensure her acceptance to one of the best schools in the country.
Piper isn’t at Chiswick for two days before she witnesses the intense competition in the journalism program—and the extreme privilege of the young and wealthy elite who attend her school. And Piper knows access to these untouchable students just might give her the edge she’ll need to blow the lid off life at the school in a scathing and unforgettable exposé worthy of the Bennington.
The key to the whole story lies with Rafael Amador, the son of the Spanish ambassador—and the boy at the center of the most explosive secrets and scandals on Embassy Row. Rafael is big trouble—and when he drops into her bedroom window one night, asking for help, it’s Piper’s chance to get the full scoop. But as they spend time together, Piper discovers that despite his dark streak, Rafael is smart, kind, funny, and gorgeous—and she might have real feelings for him. How can she break the story of a lifetime if it could destroy the boy she just might love?


The Good, the Bad, and the Ugly: I really hate writing reviews for books that were just meh. There was nothing incredible about Diplomatic Immunity, but there also wasn't anything horrible about it.
Piper felt bland to me. She wasn't anything special, and I never connected with her narrative. Ms. Ashton's writing style was kind of monotone, and the time jumps were often big and confusing. She would summarize what those time jumps covered, which felt like I was getting a book that was told, not shown. I think those time jumps were supposed to emphasize the times when Rafael acted distant, but they felt stilted and when Rafael and Piper would talk after them, I felt like there was supposed to be more tension than there was. I also felt like there was supposed to be more tension when it came to the Baird family's money problems, but I didn't care about them. I didn't understand why Piper and Charlotte were friends; they just seemed like characters interacting, not best friends. It also peeved me that Piper only had Charlotte as a friend. That seems to be the case with so many YA protagonists, and it's a trend I'm way over. I myself may not have a lot of friends, but I definitely have more than one (and I have more than one best friend, too).
I knew Piper and Rafael would get together, because all the signs were there from their first meeting. But I never shipped it, and I honestly didn't care if they become an item. Actually, I kind of wanted Piper to remain strong and not fall for the stereotypically attractive, mysterious, foreign guy.
There were a few s-words and f-words. Lots of underage drinking and some talk of drug use.

The Verdict: Probably not worth your time. Diplomatic Immunity felt very formulaic and bland.