Review: The Opposite of Here 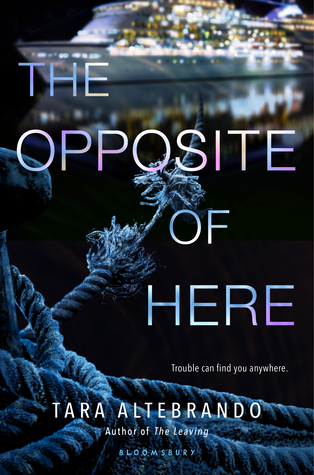 The Opposite of Here by Tara Altebrando
Grade: C
Release date: June 5, 2018
An ARC was provided by Bloomsbury in exchange for an honest review. I am now an intern at Bloomsbury, but that in no way has affected my opinion of this book.
Summary: There's no hiding on a cruise ship-not even from yourself.
Natalie's parents are taking her and her three best friends on a cruise for her seventeenth birthday. A sail-a-bration, they call it. But it's only been a few short months since Natalie's boyfriend died in a tragic accident, and she wants to be anywhere but here.
Then she meets a guy on the first night and sparks fly. After a moonlit conversation on a secluded deck of the ship, Natalie pops down to her cabin to get her swimsuit so they can go for a dip. But when she returns, he's gone. Something he said makes her think he might have . . . jumped? No, he couldn't have.
But why do her friends think she's crazy for wanting to make sure he's okay? Also, why do they seem to be hiding something from her? And how can she find him when she doesn't even know his name? Most importantly, why is the captain on the intercom announcing the urgent need for a headcount?
With her signature thrilling storytelling, the author of The Leaving and The Possible explores our vulnerability to the power of suggestion-and the lies we tell others and ourselves-in a twisting, Hitchcock-inspired mystery with high stakes and dark secrets.
The Good, the Bad, and the Ugly: I had no idea what to expect from The Opposite of Here. In fact, it's going to be hard to summarize it and my feelings without spoiling too much. But I'll try.
Tara Altebrando balances several key plot threads in TOoH - Natalie's friendships, the mystery, Natalie's burgeoning romance, her former boyfriend's death and its impact, an interest in film, and a secret that comes to light part way through the book. I will say most of the plot threads worked pretty well, especially the film one since it was used to enhance the other plotlines. However, the reveal of the secret came about a bit too suddenly, in my opinion. I wasn't sure what was happening, and if it was real or just an imagined scene because it is first presented as one of the many short screenplays in the novel. Afterwards, though, when I realized it was real, I think it was handled a bit better.
I will say, the romance was one of my least favorite parts; thankfully, the way it wrapped up was great.
I really enjoyed the cruise setting. I liked the friendship dynamics. Each of the three girls besides Natalie - Nora, Lexi, and Charlotte - felt distinct.

The Verdict: Interesting and entertaining.

Buy: Read Between the Lynes  Barnes & Noble
Will I be adding this book to my library?: Bloomsbury gave me a finished copy.
Posted by Emma at 12:00 AM
Email ThisBlogThis!Share to TwitterShare to FacebookShare to Pinterest