From the Bookshelf to the Kitchen: Monster Cake

From the Bookshelf to the Kitchen posts are very much an Awkwordly Emma thing, but when a dear blogger friend, Jessica from Just Another Teen Reading Books, mentioned she was making a book-inspired recipe, I asked if she'd be up for a guest post! 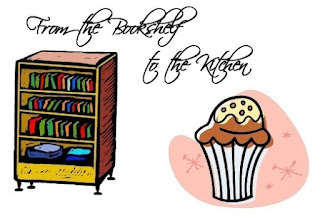 Hi, everyone! When Emma asked if I would like to write a guest post about making monster cake for her From the Bookshelf to the Kitchen series, I immediately said yes! It was so fun to bake, and I hope you all enjoy this post!

Monster Cake is a recipe that the main character, Pepper, from Tweet Cute by Emma Lord, makes during the book. It sounded so delicious, that the moment I read about it, I knew I wanted to make it. And then the author posted the recipe for it online! Here’s the link to her recipe. It’s the one I used to make this cake, with a few minor changes, for reasons I list below.
Goodreads Read Between the Lynes Barnes & Noble

First, as the the recipe instructed, I turned on the Taylor Swift era of my choice. For those wondering, it was the Lover album. :) 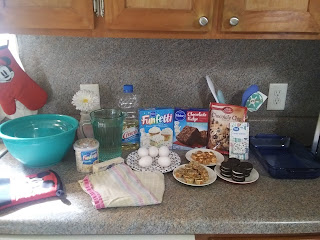 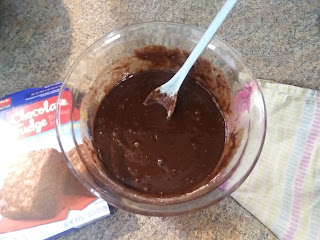 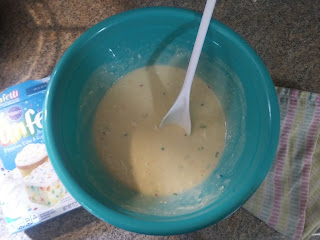 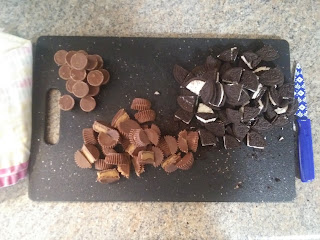 I chopped all the candy up. This is one of the things I changed from the original recipe. I used mini Reese’s instead of regular sized, because for some reason, every store I went to was sold out of big packs of full sized Reese’s cups. I have no idea why, perhaps there has been a shortage of Reese’s? Or did everyone decide to make Monster Cake this weekend? :) 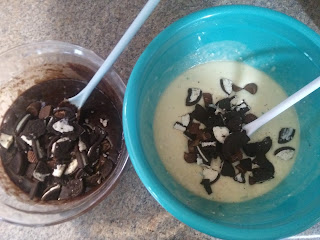 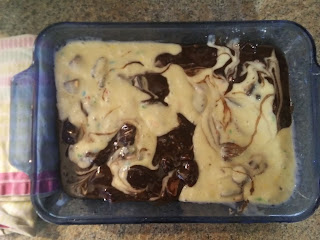 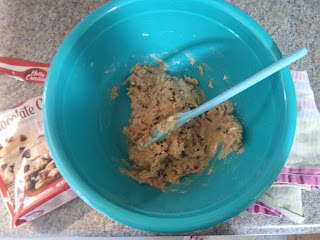 While that was baking, I made my cookie dough. This is the other change I made to the recipe. It said to use premade edible cookie dough, but I bought this bag mix, and just left out the egg. *Note* To get the texture of cookie dough, I had to melt the butter a little bit, instead of letting it be a little soft, like the bag said. 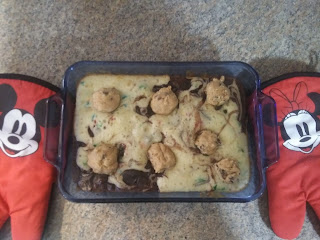 After the pan had baked for awhile, I pulled it out and added balls of cookie dough across the top of it. Then I put it back in the oven. When that finished baking, I pulled it out. It took great self control to not begin eating it immediately, because it smelled so good! 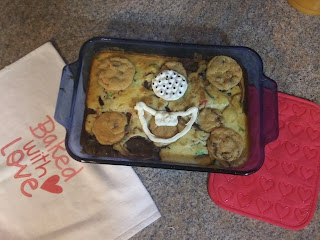 After it cooled for about an hour, I added the monster face! Then immediately after taking this photo, I proceeded to cut a slice out of it, and eat it. It was delicious! Also, if you haven’t read Tweet Cute, I highly recommend it!

Preheat the oven to 350 degrees. Mix the brownie batter, and set aside. Mix the cake batter, and set aside.
Chop the candies and Oreos. (Emma Lord set aside 16 Rolos, and chopped 12 Oreos into fourths, and eight Reese’s Cups into fourths.) (I had to substitute mini Reese's Cups here, but it worked well. I just cut them in half, instead of fourths. And I used 16, since they were smaller.) Divide the candy and cookies in half. Put half in the brownie mix, and the second half in the cake mix, and mix them together.
Grease the baking dish you’re going to use. (I used a 8x12-inch pan for it, and I ended up with enough that I was able to bake another pan of it, too.) Put piles of the cake mix and the brownie mix into the pan. Then lightly swirl. (I used a butter knife to swirl, but you can use a fork or spoon or whatever works best for you.) Put the cake in the oven for 20 minutes. (I had to bake for a little longer, but it depends on your oven.) Pull the cake out of the oven, and stick balls of cookie dough on top of it. Put the cake back in the oven for ten minutes. (Again, I had to bake for slightly longer. It depends on your oven.)
Pull the cake out of the oven, and let it cool. (I waited about an hour.)  Decorate! I used a decorating bag, and made a mouth, then attached the eyes with icing. Make whatever monster face you want!  Eat the Monster Cake! I really loved it, and it was a hit with everyone I gave it to, as well!

Thank you to Emma for letting me write this guest post! I had a lot of fun! :)