The Winter Duke Mood Board from Author Claire Eliza Bartlett

After a delightful interview with Claire Eliza Barlett about her debut last spring, We Rule the Night, I'm happy to welcome her back to the blog. She has a mood board to get y'all excited for her sophomore novel, The Winter Duke. 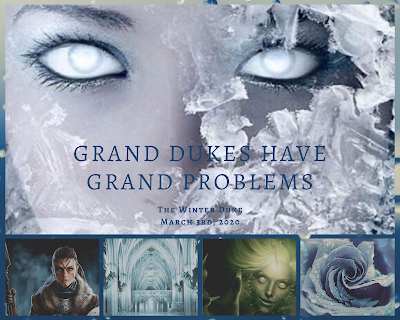 And here's some comments from Claire. :)

What I love most about THE WINTER DUKE is the setting. I had so much fun with it, and I really wanted it to have an effect on what my characters did and who they were. That's why I selected the girl under the ice for Ekata, my sarcastic disaster duke. She's in over her head, she's obsessed with the duchy in the lake beneath her own frozen realm, and her predicament threatens to consume her. Below, Inkar is her warrior maiden girlfriend-slash-wife of convenience, a fierce viking-styled warrior who still manages to be cheerful at her good fortune and overawed by her surroundings.

I really wanted to include some art that envisioned the duchy Below, but I had trouble getting a hold of exactly what I wanted. So instead, I included one of the main characters from Below - Meire, Ekata's liaison into this underwater kingdom. She looks a little dangerous here; the duchy Below is definitely a different world than the world Ekata usually inhabits!

I picked an ice palace and a rose to encapsulate the world above the ice - Ekata is surrounded by cold grandeur, living in a tiny duchy where almost everything is ice. The roses have a thematic significance - but you'll have to read the book to find out what it is!

Thanks so much for sharing, Claire! Below, you'll find a little more about the book, plus some relevant links.

When Ekata's brother is finally named heir, there will be nothing to keep her at home in Kylma Above with her murderous family. Not her books or science experiments, not her family's icy castle atop a frozen lake, not even the tantalizingly close Kylma Below, a mesmerizing underwater kingdom that provides her family with magic. But just as escape is within reach, her parents and twelve siblings fall under a strange sleeping sickness.

In the space of a single night, Ekata inherits the title of duke, her brother's warrior bride, and ever-encroaching challengers from without—and within—her own ministry. Nothing has prepared Ekata for diplomacy, for war, for love...or for a crown she has never wanted. If Kylma Above is to survive, Ekata must seize her family's power. And if Ekata is to survive, she must quickly decide how she will wield it.

Part Sleeping Beauty, part Anastasia, with a thrilling political mystery, The Winter Duke is a spellbinding story about choosing what's right in the face of danger.

I am a writer and tour guide in Copenhagen, Denmark. Though I originally come from Colorado, I left the US when I was eighteen and I haven’t lived there since. More permanent stops on my travels have included Switzerland, Wales and Denmark. The arrival of a Danish husband has somewhat cemented my living situation, but I get my travel in smaller doses these days. I like to write fantasy, mostly, though I dabble in soft sci-fi. My short stories are more adult, my novels more YA. I’ve studied history, archaeology, and writing. I like to take my inspiration from historical events, and the more unknown and inspiring the event, the better. I am represented by Kurestin Armada of P.S. Literary.
Posted by Emma at 12:00 AM
Email ThisBlogThis!Share to TwitterShare to FacebookShare to Pinterest