I've said before that I don't do a lot of book tags; they just aren't my favorite type of post. But when Morgan from Gone With the Words Tweeted about making a Captain America one, I knew I'd be all over that. So here we go. 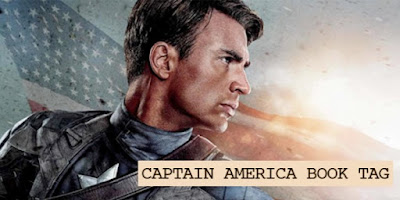 Created by Morgan @ Gone with the Words

1. Steve Rogers/Captain America
(A book with a big character transformation.)
The Girl of Fire and Thorns - Elisa changes so much through the series, but especially the first book. She grows into such a strong leader who believes in herself and loves who she is, and I think that's such a positive message for teens.

2. Peggy Carter
(A book with a strong female protagonist.)
Oh man, I could name oodles. I mean, I even did a post with twelve of my favorites for The Odyssey two months ago. But I'll say Mercy Wong from Outrun the Moon. She is determined and clever and knows how to be compassionate.

3. Bucky Barnes
(A book with your ultimate BROTP [like an OTP but friendship instead].)
Gallagher Girls series - Cammie and Co. are my faves. They have each other's backs and they're all talented in their own way.

4. Howling Commandos
(A book with squad goals.)
The Lunar Chronicles - Obviously the Rampion crew. Like, I want to be BFFs with all of them, but also their ability to slay is so intimidating.

5. Red Skull
(A book with a cliche plot.)
Red Queen - I'm sure a lot of people might be finding books they can be positive about with this category, but this was the first book that came to mind, and oh man, it's cliche in all the wrong ways.

6. Natasha Romanoff
(A book with a snarky side character.)
The Fixer - Asher had me laughing from the moment he appeared on page and I remember highlighting so many of the things he said while reading my e-galley.

7. Sam Wilson
(A book with a friendship meet-cute.)
I really struggled with this category because I guess most of the books I read either involve characters who already have their friend groups established, or there's nothing particularly special about the first time they meet their new friends. Yeah, Tess and Asher's meeting in The Fixer is pretty good, but I didn't want to repeat an answer. But I think I'll have to say Kat and Hale in the Heist Society series. We don't really see how they met until Perfect Scoundrels, but it's hinted at in the previous books.

8. Winter Soldier
(A book with a great twist - plot twist, or retelling.)
All In - And that's all I'm saying. *zips lips*

9. I'm Just a Kid From Booklyn
(A book with a memorable setting or character backstory.)
Firebird trilogy - Both A Thousand Pieces of You and Ten Thousand Skies Above You were so vivid and creative. I loved visiting all of the parallel worlds.

10. Do You Two...Fondue?
(A book with a love triangle.)
Splintered trilogy - The only love triangle I really like, to be honest. (I like John Ambrose McClaren from P.S. I Still Love You but I don't like the love triangle.)

11. You've Been Asleep, Cap
(A book with a dual timeline or time travel.)
Once again, I could list several because parallel worlds and time travel are two of my favorite plot devices. But I'll say The Girl from Everywhere because that I can't push that book enough.

12. The End of the Line
(A book with the OTP to end all OTPs.)
The Start of Me and You - Max and Paige are GOALS.
(Honorable mentions: Kat and Hale from Heist Society and Marguerite and Paul from A Thousand Pieces of You)

Do you know of other book tags you think I'd like? (I'm kind of getting hooked on them...) Or do you love Captain America, too? Feel free to do this book tag yourself! Just make sure to link back to Morgan's original post.
Posted by Emma at 12:00 AM
Email ThisBlogThis!Share to TwitterShare to FacebookShare to Pinterest
Labels: book tag