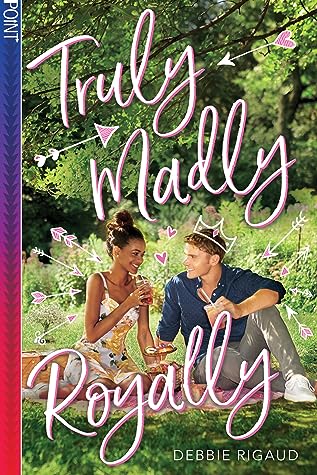 Truly Madly Royally by Debbie Rigaud
Grade: B-
Release date: July 30, 2019
An ARC was provided by Miss Print's ARC Adoption Program in exchange for an honest review.
Summary: Fiercely independent and smart, Zora Emerson wants to change the world. She's excited to be attending a prestigious summer program, even if she feels out of place among her privileged, mostly white classmates. So she's definitely not expecting to feel a connection to Owen, who's an actual prince of an island off the coast of England. But Owen is funny, charming...and undeniably cute. Zora can't ignore the chemistry between them. When Owen invites Zora to be his date at his big brother's big royal wedding, Zora is suddenly thrust into the spotlight, along with her family and friends. Everyone is talking about her, in real life and online, and while Owen is used to the scrutiny, Zora's not sure it's something she can live with. Can she maintain her sense of self while moving between two very different worlds? And can her feelings for Owen survive and thrive in the midst of the crazy? Find out in this charming romantic comedy that's like The Princess Diaries for a new generation.

The Good, the Bad, and the Ugly: I love a good meet-cute. Truly Madly Royally has a great one, and I wish the premise connected to that had continued a little while longer before launching into Zora and Owen actually dating.
Overall the book is a bit surface-level, like a DCOM or Hallmark movie, but there were some moments where the author tried to go a little deeper. I'm not sure they always worked, but I appreciated the moments about Black hair, when racist issues were highlighted, and when the supposed mean girl was given depth (though I wish that had come a little sooner so she had felt like less of a stereotype).
I appreciated that Owen wasn't the heir to the throne, and I liked that he did call Zora out on some stuff, thereby helping her character arc, but I felt kinda meh about the romance in general. It didn't give me butterflies like some YA romances do.
I found Owen's dialogue a bit stiff at times like the author was trying to make him a little more formal because of his upbringing, but not quite succeeding at that goal, especially when he used some phrasings and slang that were still very American.

The Verdict: This is a great choice for younger YA readers.


Buy: Read Between the Lynes  Barnes & Noble
Will I be adding this book to my library?: Still thinking about it.
Posted by Emma at 12:00 AM
Email ThisBlogThis!Share to TwitterShare to FacebookShare to Pinterest