Songs from the Deep Blog Tour and Review

Hey, guys, I'm so excited to be on another Simon Teen blog tour. :) This one is for a super atmospheric fantasy debut. 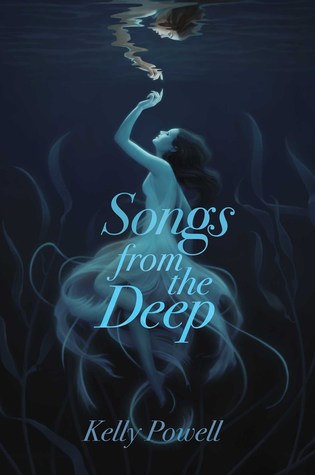 The sea holds many secrets.
Moira Alexander has always been fascinated by the deadly sirens who lurk along the shores of her island town. Even though their haunting songs can lure anyone to a swift and watery grave, she gets as close to them as she can, playing her violin on the edge of the enchanted sea. When a young boy is found dead on the beach, the islanders assume that he's one of the sirens’ victims. Moira isn’t so sure.
Certain that someone has framed the boy’s death as a siren attack, Moira convinces her childhood friend, the lighthouse keeper Jude Osric, to help her find the real killer, rekindling their friendship in the process. With townspeople itching to hunt the sirens down, and their own secrets threatening to unravel their fragile new alliance, Moira and Jude must race against time to stop the killer before it’s too late—for humans and sirens alike. 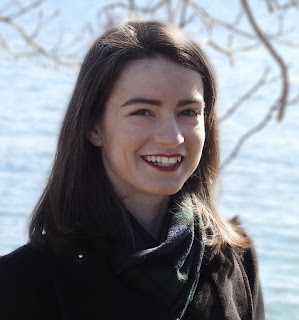 Kelly Powell writes fantasy for young adults and currently lives in Ontario, Canada. She has a bachelor’s degree in history and book & media studies from the University of Toronto.

Songs from the Deep is one of those quiet, atmospheric stories that draws you in with a mystery. It's set on a fantasy island haunted by sirens that usually leave the residents alone while targeting tourists. But one day, they're blamed for the death of a young island boy - but the main character, Moira, doesn't believe they're responsible. She takes it upon herself to find the real killer.
The book is also very character-focused, zooming in on Moira and Jude. I think I would've liked a slightly expanded circle, but it's never a bad thing to get to know fewer characters very well.
If you're looking for a super mermaid-y book, then Songs from the Deep probably isn't for you. BUT. The sirens are still important creatures, almost standing in for any people group who is different from another. And that probably serves the best theme in this quiet, almost literary fantasy story.

Content warnings: Murder, gore
Posted by Emma at 12:00 AM
Email ThisBlogThis!Share to TwitterShare to FacebookShare to Pinterest