This post was very unplanned.  I only wrote it yesterday, which is unusual for me.  I was taking a quick look at the unreleased portion of my TBR list, and I realized that I wanted to know the representation of each publisher in my list.  Well, the results were pretty telling. 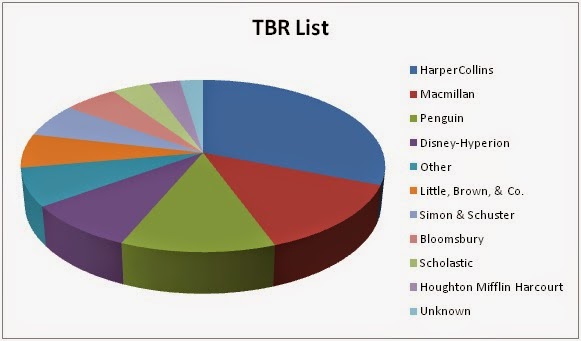 As you can see, HarperCollins and their various imprints clearly dominate my TBR list with 39 titles (out of 126).  The Other category includes smaller publishers (particularly those with only 1 title I'm interested in), and the Unknown category has three 2015 titles.  I have a fair idea where most of them will be published, but Goodreads didn't tell me and I didn't want to put wrong info.
MacMillan, Penguin, and Disney-Hyperion all have good showings, although the amount of each one's books on my TBR list is at least 2 times smaller than HarperCollins'.
So, this is another way I can organize my TBR list (following up on last week's Random Friday post), although it isn't one I'll use often.  I was only curious because I was replying to a friend's post about fall 2014 HarperCollins releases, and I wanted to see which HarperTeen/Greenwillow/Katherine Tegan/B+B titles I wanted to read.

Okay, so do y'all know which publisher has a bit of a monopoly on your TBR list?
Posted by Emma at 8:00 AM
Email ThisBlogThis!Share to TwitterShare to FacebookShare to Pinterest