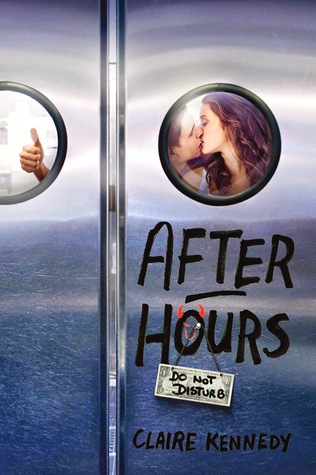 After Hours by Claire Kennedy
Grade: F
Release date: June 16, 2015
This e-galley was provided by Simon Pulse via Edelweiss in exchange for an honest review.
Summary: Isa, Xavi, Peter, and Finn know that a job at the high-end Waterside Cafe isn't just about waiting tables. It's about the gossip, the hook-ups, the after-hours parties and, most of all, it's about Tips. Tips--the high-stakes game based on dares. Whoever completes the most dares wins the collected money. A sum that could change a wasted summer into a Summer to Remember.
Isa is the new girl with an embarrassing secret, and as long as she stays on top of her game, she sees no reason why anyone could ever find out. Xavi will do anything for the money...absolutely anything. Peter, Xavi's stepbrother, has been in love with her for years, and he thinks the game is the perfect time to confess his feelings. Finn is in the game just for the thrill. He has enough tips coming in to keep him happy...even if those tips come with some conditions.
From seduction to stealing to threats, the dares are a complete free-for-all, and only the best can win.

The Good, the Bad, and the Ugly: The only reason I finished After Hours is that it's a short book. Other than that, it was everything I hate in a YA novel. I thought After Hours sounded like a fun premise but there was way too much foul language, sex, underage drinking, and all-around bad decisions. (So basically Panic in a restaurant setting with less severe dares.) I went into the book hoping to like the characters and, at first, I thought I would. Isa didn't seem so bad; I can understand why she'd want to keep a secret like that. But then we got into Finn's narrative, and I instantly knew where it was going and I was completely grossed out. That kid is underage and all those women are in, like, their 40s. Xavi got on my nerves with the way she didn't really like Isa, just because she was new and a waitress. And Rico was an utter creep. I'm only glad he got his just desserts at the end. But the other characters got off way too easy.

The Verdict: Not really worth your time, unless you love an abundance of inappropriate content.

Will I be adding this book to my library?: No way.
Posted by Emma at 1:00 AM
Email ThisBlogThis!Share to TwitterShare to FacebookShare to Pinterest