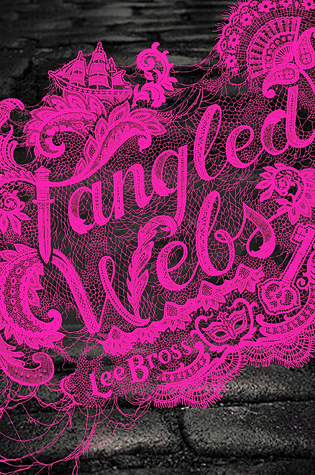 Tangled Webs by Lee Bross
Grade: C
Release date: June 23, 2015
This e-galley was provided by Disney-Hyperion via NetGalley in exchange for an honest review.
Summary: Lady A is the most notorious blackmailer in the city. With just a mask and a gown to disguise her, she sweeps into lavish balls and exclusive events collecting the most valuable currency in 1725 London—secrets.

But leading a double life isn't easy. By day Lady A is just a sixteen-year-old girl named Arista who lives in fear of her abusive master, Bones, and passes herself off as a boy to move safely through the squalor of London's slums. When Bones attempts to dispose of his pawn forever, Arista is rescued by the last person she expects: Jonathan Wild, the infamous Thief Taker General who moves seamlessly between the city's criminal underworld and its most elite upper circles. Arista partners with Wild on her own terms in the hopes of saving enough money to buy passage out of London.

Everything changes when she meets Graeden Sinclair, the son of a wealthy merchant. Grae has traveled the world, has seen the exotic lands Arista has longed to escape to her whole life, and he loves Arista for who she is—not for what she can do for him. Being with Grae gives something Arista something precious that she swore off long ago: hope. He has promised to help Arista escape the life of crime that has claimed her since she was a child. But can you ever truly escape the past?

The Good, the Bad, and the Ugly: For an historical fiction novel that promised pretty much everything that's my catnip, Tangled Webs fell pretty short. I felt kind of meh about most of the story until about page 149 of my ARC. Certain characters felt too much like caricatures; their dialogue and actions just seemed too fake. And Arista herself had moments where she was intelligent, clever, and pretty darn cool, and then she would turn into a naive, bumbling, unobservant girl. I also got the feeling that she wasn't as experienced with that knife as she portrayed herself. The contrast was a bit unbelievable. The plot was fairly cut-and-dry, which can be a good thing, but I was expected more...tangles, particularly since I'm very certain the synopsis gives away the whole story. There was also a mini sideplot with Sophia Sinclair that I thought could've had a lot of potential since Voltaire was involved, but it went nowhere. Also pertaining to the plot, I saw that Tangled Webs is the first of a series and I'm not sure that's necessary. The plot, simple as it was, wrapped up fairly well in just one novel.
As for the romance, I kind of liked it at first because Grae and Arista clearly irritated each other. But she was also immediately taken with him, which I thought was cliche. Then she started obsessing over him and eventually, they were saying they were in love when I'm pretty certain the two had only known each other for a few weeks. I quickly became disenchanted with the romance and no longer cared if their relationship survived the book.
Some foul language, nothing too major, though. There were violent moments. There was kissing and talk of many low-cut dresses (and their effects) and brothels.

The Verdict: Ultimately, not the YA historical fic I dream of.

Buy: Read Between the Lynes  Barnes & Noble
Will I be adding this book to my library?: Leaning towards no.
Posted by Emma at 1:00 AM
Email ThisBlogThis!Share to TwitterShare to FacebookShare to Pinterest