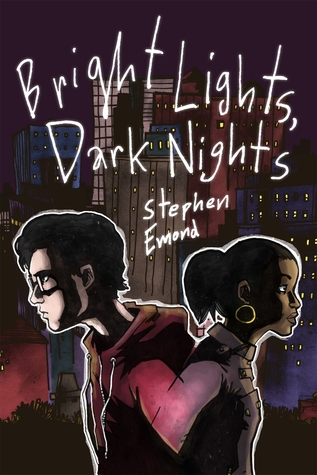 Bright Lights, Dark Nights by Stephen Emond
Grade: C
Release date: August 11, 2015
An e-galley was provided by Roaring Brook Press via NetGalley in exchange for an honest review.
Summary: A story about first love, first fights, and finding yourself in a messed up world, from the acclaimed author of Happyface.

Walter Wilcox has never been in love. That is, until he meets Naomi, and sparks, and clever jokes, fly. But when his cop dad is caught in a racial profiling scandal, Walter and Naomi, who is African American, are called out at school, home, and online. Can their bond (and mutual love of the Foo Fighters) keep them together?

With black-and-white illustrations throughout and a heartfelt, humorous voice, Bright Lights, Dark Nights authentically captures just how tough first love can be...and why it's worth fighting for.

The Good, the Bad, and the Ugly: Bright Lights, Dark Nights (hereafter referred to as Dark Nights) is a book without a solid plot. Racial profiling and Walter's relationship with Naomi are perhaps the most important plotlines but neither really had enough meat to carry the story. Jason and Walter's friendship left me a bit baffled. It sounded like they were good friends, but then everything fell apart pretty quickly after Walter and Naomi became an item. The romantic relationship in this book felt unnatural to me - just the way the two teenagers phrased things and fell in love so quickly and all that jazz. There wasn't enough awkwardness (there was cute awkwardness but that isn't enough). I liked the idea of the interracial relationship, particularly since the scandal with Walter's dad made things complicated. That plotline, although it couldn't carry Dark Nights, was the best part of the book, in my opinion. As a reader, I wasn't sure what to believe. Should I believe Officer Wilcox, since Walter wanted to believe his dad? Or should I believe the kid who was accusing Officer Wilcox of racial profiling? Walter's dad didn't make great choices in the aftermath of the accusations, but they were all realistic. As for other characters, Walter's friends and some other kids at school play a small part in the book but they all felt shoehorned in at times. The presence of Walter's older sister and mother were good, though. Although it felt a bit out of place, the storyline with Walter's mother was good.
Foul language, making out, and physical fights fall under the "ugly."

The Verdict: Good, but not a book I'd reread or shove at people. With some more editing, it could've been even better.