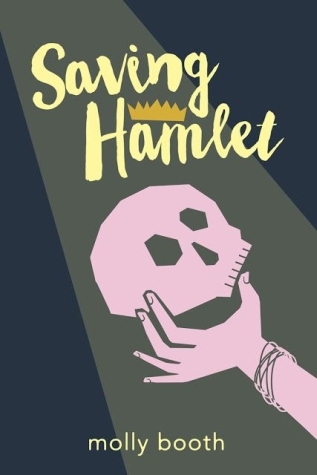 Saving Hamlet by Molly Booth
Grade: B+
Summary: Emma Allen couldn't be more excited to start her sophomore year. Not only is she the assistant stage manager for the drama club's production of Hamlet, but her crush Brandon is directing, and she's rocking a new haircut that's sure to get his attention. But soon after school starts, everything goes haywire. Emma's promoted to stage manager with zero experience, her best friend Lulu stops talking to her, and Josh--the adorable soccer boy who's cast as the lead--turns out to be a disaster. It's up to Emma to fix it all, but she has no clue where to start.
One night after rehearsal, Emma stays behind to think through her life's latest crises and distractedly falls through the stage's trap door . . . landing in the basement of the Globe Theater.
It's London, 1601, and with her awesome new pixie cut, everyone thinks Emma's a boy--even Will Shakespeare himself. With no clue how to get home, Emma gamely plays her role as backstage assistant to the original production of Hamlet, learning a thing or two about the theater, and meeting an incredibly hot actor named Alex who finds Emma as intriguing as she finds him. But once Emma starts traveling back and forth through time, things get really confusing. Which boy is the one for her? In which reality does she belong? Will Lulu ever forgive her? And can she possibly save two disastrous productions of Hamlet before time runs out?

The Good, the Bad, and the Ugly: If you know me, you know I'm a sucker for any YA book that is a retelling of or incorporates Shakespeare. So Saving Hamlet was right up my alley. (Plus the main character shares my name, so I mean, it was a given that I'd have to give this book a try.)
I loved that Emma was younger than most YA characters, which meant this book was highly relatable for younger YA readers. Also, the book explored friendship troubles, which I thought was a great topic. Lulu was a tad annoying, to be honest, and Emma was presented like she was always in the right, but I did like the dynamics between them.
The time travel bits never had a clear explanation, but I liked how it all worked and how Emma found herself through working with the Lord Chamberlain's actors.
Boy-wise, Josh was definitely my favorite, so I'm glad how things worked out in that department. Brandon was annoying, and Cooke was just a little too perfect. The drama with the soccer team seemed a bit underdeveloped to me, and the stuff with Emma's former teammates seemed a bit cliche and overly dramatic. Also, I really hated that Stanley called Emma "Mama." It pulled me out of the story every time he did it and grated on my nerves.
Mild language. Nothing explicit in either the romance or violence department.

The Verdict: If you love Shakespeare, this is a must-read!

Buy: Read Between the Lynes  Barnes & Noble
Will I be adding this book to my library?: I preordered it!
Posted by Emma at 12:00 AM
Email ThisBlogThis!Share to TwitterShare to FacebookShare to Pinterest