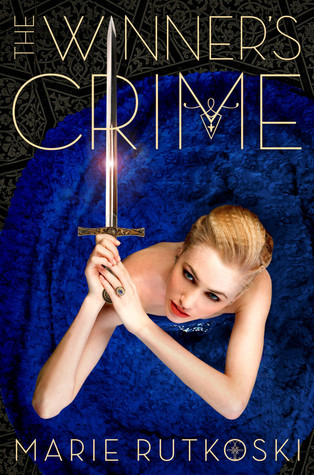 The Winner's Crime by Marie Rutkoski
Grade: A
Summary: Following your heart can be a crime

A royal wedding means one celebration after another: balls, fireworks, and revelry until dawn. But to Kestrel it means living in a cage of her own making. As the wedding approaches, she aches to tell Arin the truth about her engagement: that she agreed to marry the crown prince in exchange for Arin's freedom. But can Kestrel trust Arin? Can she even trust herself?

Kestrel is becoming very good at deception. she's working as a spy in the court. If caught, she'll be exposed as a traitor to her country. Yet she can't help searching for a way to change her ruthless world...and she is close to uncovering a shocking secret.

This dazzling follow-up to The Winner's Curse reveals the high price of dangerous lies and untrustworthy alliances. The truth will come out, and when it does, Kestrel and Arin will learn just how much their crimes will cost them.

The Good, the Bad, and the Ugly: If you liked the romance bits of The Winner's Curse, you'll love The Winner's Crime. If you preferred the scheme-y bits, you'll love pieces of the trilogy's second book, but there's definitely more romantic tension. I did like parts of the romance in this book, but I was really hoping for a Kestrel-Verex ship (although that would've meant a love triangle, and I'm weary of those). Verex is one of my favorite characters in the series; he reminds me a teeny bit of Dorian from Throne of Glass, and I really like Dorian, so I was destined to like Verex.
The Winner's Crime starts off with a gory bit of violence, which was very startling because, while The Winner's Curse had its violent moments, nothing was as intense as that torture scene. Still, I love how throughout everything, readers are better able to piece together who Kestrel is. She makes hard choices that maybe aren't always the best, but she tries hard to minimize damages. I am mad with where the storyline with Jess went, especially because that eliminated the only solid female friendship in this series.
That ending killed me on my first read-through of this book and, while it's still devastating, it's less startling, of course, and not so murderous.

The Verdict: Doesn't suffer from second-book syndrome. (Also I'm pretty sure I caught the Much Ado About Nothing reference.)