We are down into the single digits before I leave for Asbury!  This is scary crazy and also really exciting.  I have posts scheduled for the next few weeks, but I might be a little slow publishing comments once I'm down in Kentucky.  I'm not sure how much Internet time I'll get (hopefully enough to write the Random Friday post for the 15th...) and I'm also giving myself 3 weeks until the next Rewind & Review (partially since I likely won't acquire too many books).
I got to go to an unexpected author event on the 25th, which was loads of fun.  I got to see Erica O'Rourke, Joelle Charbonneau, and Stacey Kade - all of whom I've met before - and I got to meet Liz Czukas.  They're all fun authors, who give great hugs.
I've been packing up my room, which is very bittersweet and nerve-wracking.  I packed a ton of my books (and other things) and then instantly regretted it because I packed an ARC I'm suddenly dying to read.  Oops...

Books I Received
Don't Touch by Rachel M. Wilson (Thanks to Rachel and the On the Same Page ARC tour!)
Rebel Belle by Rachel Hawkins
The Elite by Kiera Cass (Traded for this one and Rebel Belle through the YA Book Exchange, so thank you to Allie!)
Unforgettable Summer by Catherine Clark (Swapped books with Meredith from Pandora's Books. Thank you!)
In a Handful of Dust by Mindy McGinnis
Let's Get Lost by Adi Alsaid (Thank you to Read Between the Lynes for this ARC and the one above!)
Killer Instinct by Jennifer Lynn Barnes (Thank you so much, Disney-Hyperion!  I actually squealed when I pulled it out of the envelope.)
Finding Ruby Starling by Karen Rivers (via NetGalley and Arthur A. Levine Books)
Being Audrey Hepburn by Mitchell Kriegman (via NetGalley and St. Martin's Griffin)

Books I Won
Broken Hearts, Fences, and Other Things to Mend by Katie Finn (I won a Broken Hearts prize pack during the readathon back in June.  So now I have a signed hardcover of the book, plus some awesome book swag - lip balm!)
Top Ten Clues You're Clueless by Liz Czukas (Won this at the author event last Friday, and I think I may have literally book shimmied, squealed, and petted the ARC.  I swear I'm not a huge dork.)
This stack of books: 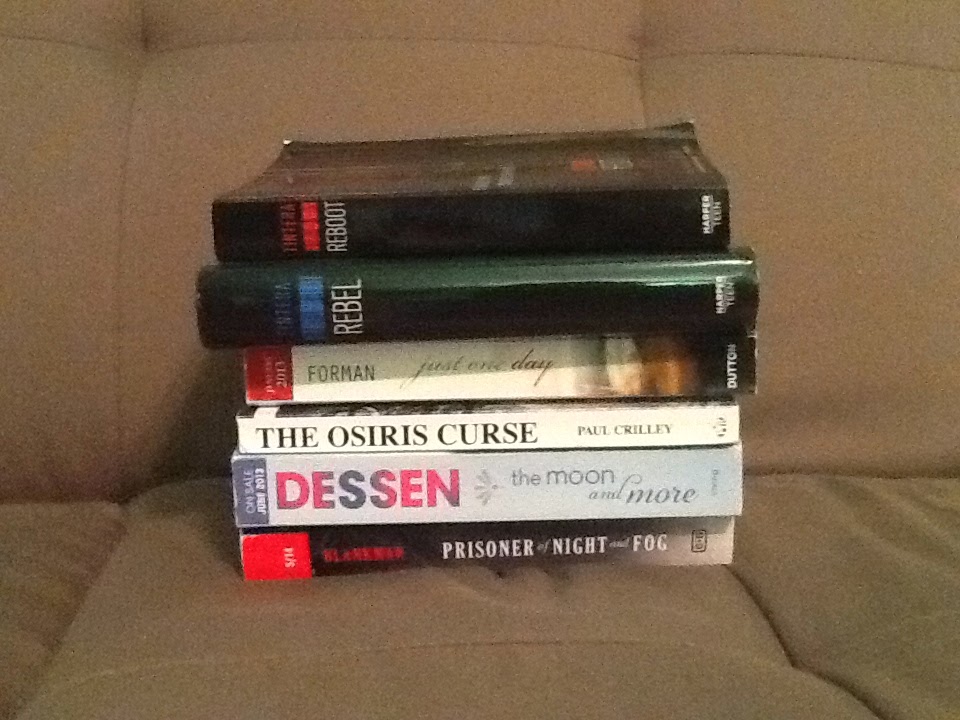 from Books With Bite (from her blogoversary giveaway).

Books I Bought
There You'll Find Me by Jenny B. Jones (e-book)
Ask Again Later by Liz Czukas
Independent Study by Joelle Charbonneau
Dissonance by Erica O'Rourke
Like No Other by Una LaMarche
Isla and the Happily Ever After by Stephanie Perkins (My preorder and all the goodies arrived super early, so I'm over the moon!)