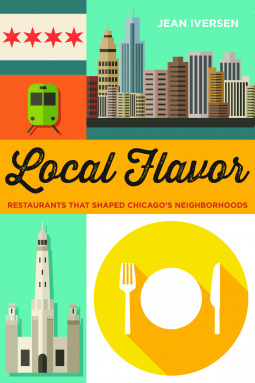 Local Flavor: Restaurants That Shaped Chicago's Neighborhoods by Jean Iversen
Grade: B
An e-galley was provided by Northwestern University Press via NetGalley in exchange for an honest review.
Summary: The neighborhoods that make up Chicago's rich cultural landscape have been defined by the restaurants that anchor them. In Local Flavor, the popular food writer Jean Iversen chronicles eight beloved local eateries, from Chinatown on the South Side to Rogers Park in the far North, tracing the story of how they became neighborhood institutions.
Iversen has meticulously gathered the tales, recipes, and cultural traditions that define Chicago's culinary past and present. Rich with firsthand accounts from local restaurateurs, their families, long-time customers, and staff, Local Flavor is a community-driven look at Chicago through a gastronomical lens.
Including recipes for popular dishes from each restaurant that readers can try at home, Local Flavor weaves together ethnography, family, and food history into a story that will enthrall both food and Chicago history lovers.


The Good, the Bad, and the Ugly: I lived in Illinois for 15 years, 9 of which were in a Chicago suburb. I've been downtown more times than I can count. To hear more about the cuisines that have shaped the city was wonderful, particularly since it reminded me about the diversity of Chicago.
Iversen gives the history of a restaurant for each section - Chinese, Italian, Mexican, Greek, Jamaican, Polish, Indian, and Persian. I was most looking forward to the Polish section, just because the Polish history of Chicago fascinates me. That section was one of my favorites, but the section on Hema's Kitchen (Indian food) and Borinquen (Jamaican) surprised me with how much I enjoyed them.
There are many stories of endurance in this short book, and I loved seeing how much the various restaurant owners invested in their communities through their businesses. I could've done with a little less history about neighborhoods, but perhaps people from those areas will appreciate it.
I do think it would've been nice to hear about a restaurant run by African-Americans, since (as of 2010) Chicago's population was 32% black. I know Iversen's book focused on immigrants but to leave out Chicago's largest minority seemed odd to me.

The Verdict: How fun is that cover? Also, a great read for anyone who likes food, a variety of personal stories, and/or Chicago.

Buy: Read Between the Lynes  Barnes & Noble
Will I be adding this book to my library?: Hmm, I'll consider it.
Posted by Emma at 12:00 AM
Email ThisBlogThis!Share to TwitterShare to FacebookShare to Pinterest