Interview with Claire Eliza Bartlett, Author of We Rule the Night

Hey, y'all, I'm so excited to welcome Claire Eliza Bartlett, author of the upcoming We Rule the Night, to the blog today for an interview!

Emma: I know you were partially inspired by the Night Witches in WWII, but was there any other historical inspiration that went into writing We Rule the Night?
Claire: When building the world of We Rule the Night I found the need to delve into the Soviet side of World War II in general. I explored the development and politics of the USSR, the USSR's approach to total war, and individuals who did amazing things, both on the Soviet side and on other sides. There are so many incredible people! Check out Virginia Hall, the most wanted member of the French Resistance, or Douglas Bader, a double below-knee amputee pilot who escaped from a Nazi prisoner of war camp no less than three times. Or Bessie Coleman, a black and Native American woman who traveled the world in pursuit of her pilot's license. The story of the Night Witches is, at its core, the story of incredible people, so I went looking for a lot of them to fuel my fire.

Emma: What is easiest for you when writing - plot, dialogue, setting, characters, etc.?
Claire: Writing dialogue. When a scene is proving tricky, I usually pin it down with dialogue and that gets the bones together. I can promise you, I am NOT good with plot. I enjoy getting into characters and scenery, but that often happens on the second or third pass - whereas dialogue only changes if the circumstances change.

Emma: If you could travel to any fantasy world (either just for a day or a longer stay), which would it be and why?
Claire: Just one? This is an answer that would probably change depending on the day you ask me, but today I'd travel to the world of Spirited Away. It's bright and colorful and fun, filled with something new to discover around every corner. As long as I'm careful not to turn myself into a pig!

Emma: Talk to me about the main characters in We Rule the Night. Was one easier to write than another? Or did they each have challenging moments?
Claire: My girls Revna and Linné both have a bit of me in them, and both had their own challenges. Revna's voice was sometimes easier to slip into, because I think it's more like my natural voice. But it was hard to pin down her motivation and a good character arc. By contrast, Linné's arc was clear to me from the first, and she has more of my inner fire. I always knew how she'd react in a fight, but sometimes that made it hard to give her a learning point, a point where she had to back down in order to grow.

Emma: Was there a scene or character you had to cut that was really painful to let go of?
Claire: I didn't cut her, but there's a secondary character called Magdalena that kind of stole my heart. I had to cut her major introductory scene when early readers were saying it slowed the story down. I just love her cheer!

Emma: What other upcoming or recent YA titles do you recommend?
Claire: 2019 is going to be a brilliant year, my friends. The Weight of Our Sky is historical YA and out now; I started crying on page 30 and I didn't stop till the novel was over.  Descendant of the Crane, by Joan He, is coming April 2nd and definitely for you if you want an engaging political fantasy. Right now I'm also in the middle of The Afterward by E.K. Johnston and I am so in love - it's a queer fantasy set after the big quest has been completed, and the saviors of the world have to go back to 'real' life. Immoral Code by Lillian Clark is a great nerdy, light-but-with-heart contemporary heist novel that I got so into I read it under the covers when I was on vacation with my Mom! And Enchantée by Gita Trelease, An Affair of Poisons by Addie Thorley and Spectacle by Jodie Zdrock are all great and unique blends of magic and history, specifically French history. I couldn't decide which one to recommend to you so here are all three!

Emma: Cake or pie, and what kind?
Claire: Oh lord, how do I answer a question like THAT? ummmmmmmm....pie? A berrylicious kind? (but then it doesn't have any CHOCOLATE and who could live without THAT and maybe I can cheat and find some amalgam of cake and pie) you know, there's an amazing cheesecake salon here in Copenhagen called Bertels where I can get things that resemble cake, and things that resemble pie. So, CHEESECAKE.

Emma: Thanks so much for stopping by, Claire! We Rule the Night is available for preorder and will be out on April 2nd.

Goodreads  Read Between the Lynes  Barnes & Noble
The Book Depository

Two girls use forbidden magic to fly and fight–for their country and for themselves–in this riveting debut that’s part Shadow and Bone, part Code Name Verity.
Seventeen-year-old Revna is a factory worker, manufacturing war machines for the Union of the North. When she’s caught using illegal magic, she fears being branded a traitor and imprisoned. Meanwhile, on the front lines, Linné defied her father, a Union general, and disguised herself as a boy to join the army. They’re both offered a reprieve from punishment if they use their magic in a special women’s military flight unit and undertake terrifying, deadly missions under cover of darkness. Revna and Linné can hardly stand to be in the same cockpit, but if they can’t fly together, and if they can’t find a way to fly well, the enemy’s superior firepower will destroy them–if they don’t destroy each other first.
We Rule the Night is a powerful story about sacrifice, complicated friendships, and survival despite impossible odds. 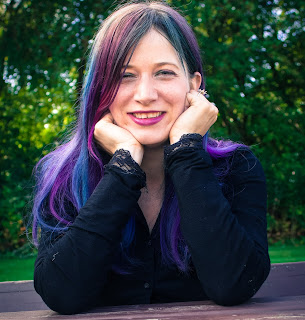 Claire Eliza Bartlett is a US citizen who grew up in Colorado. She studied history and archaeology and spent time in Switzerland and Wales before settling in Denmark for good. When not at her computer telling mostly false stories, she works as a tour guide in Copenhagen, telling stories that are (mostly) true.
Posted by Emma at 12:00 AM
Email ThisBlogThis!Share to TwitterShare to FacebookShare to Pinterest
Labels: author interview