Mini Reviews: If You're Out There and The Weight of Our Sky 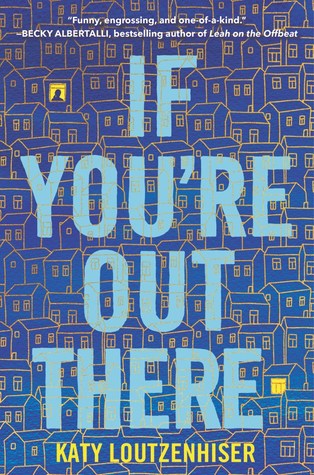 If You're Out There by Katy Loutzenhiser
Grade: C
Summary: Zan's best friend, Priya, moves to California and suddenly ghosts her. In addition, her social media sounds nothing like her. Everyone thinks Zan is overreacting until a new kid enrolls at Zan's school.

The Good, the Bad, and the Ugly: This one came highly recommended by a publishing friend, so I was eager to give it a try. I liked the setting a lot; Chicago came across well in the book, and I loved that Zan had a job at a restaurant - so normal! - made fun by the fact that restaurant is vegan. However, I found the romance to be bland. The plot twists related to What Has Happened to Priya didn't sit well with me, and I found it all to be overly dramatic and not my type of book.

The Verdict: Not what I expected.

Buy: Read Between the Lynes  Barnes & Noble
Will I be adding this book to my library?: I don't think so...

The Weight of Our Sky by Hanna Alkaf
Grade: B-
Summary: Teenaged Melati gets separated from her mother during the 1969 race riots in Kuala Lumpur, while also navigating her struggles with OCD.

The Good, the Bad, and the Ugly: At times The Weight of Our Sky read like a YA historical fiction novel from ten years ago, but with a protagonist who is actually relatable, empathetic, and human. Plus, there are compelling side characters, such as Auntie Bee, Vincent, and Frankie (although I wanted just a little more of Melati's friend, Safiyah, before they get separated). I also think I wanted a little more context within the story about the race riots. The catalyst is super early in the book, which is good for pacing but not so great for readers who know nothing about the riots. (And yes, we can Google things, but I usually don't until after I finish a book so it doesn't take me out of the story or spoil anything that'll happen later that I don't already know about.)

Content warnings (taken from the author's note at the start of the book): graphic violence, death, racism, OCD, and anxiety triggers

The Verdict: Pretty good! It feels like a debut, so I look forward to what Hanna writes next.

Buy: Read Between the Lynes  Barnes & Noble
Will I be adding this book to my library?: Thinking about it.
Posted by Emma at 12:00 AM
Email ThisBlogThis!Share to TwitterShare to FacebookShare to Pinterest