Review: This Time Will Be Different 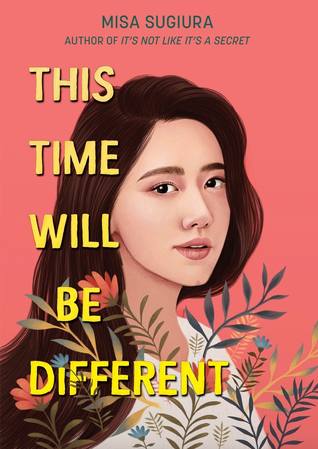 This Time Will Be Different by Misa Sugiura
Grade: C
An e-galley was provided by HarperCollins via Edelweiss in exchange for an honest review.
Summary: Katsuyamas never quit—but seventeen-year-old CJ doesn’t even know where to start. She’s never lived up to her mom’s type A ambition, and she’s perfectly happy just helping her aunt, Hannah, at their family’s flower shop.

She doesn’t buy into Hannah’s romantic ideas about flowers and their hidden meanings, but when it comes to arranging the perfect bouquet, CJ discovers a knack she never knew she had. A skill she might even be proud of.

Then her mom decides to sell the shop — to the family who swindled CJ’s grandparents when thousands of Japanese Americans were sent to internment camps during WWII. Soon a rift threatens to splinter CJ’s family, friends, and their entire Northern California community; and for the first time, CJ has found something she wants to fight for.

The Good, the Bad, and the Ugly: I am always big proponent of "the longer, the better" when it comes to books, but sometimes...longer isn't better. This Time Will Be Different clocks in at 400 pages and I felt that length throughout the whole book. While there are some good themes throughout, I think the plot needed to be condensed to something at least 50, if not 75 to 100, pages shorter.
I wanted to read TTWBD because I was interested in exploring how the internment of Japanese Americans has affected the present. Most of the history behind the present day is told in a super quick summary, though, which was a bit disappointing. I definitely felt that theme driving one of the main plots, which was great, but it felt kind of...weak? Like I had trouble seeing the connection in the present-day and why it was still such a big deal that the Katsuyamas were continuing to hold this grudge. When it began to tie into the community at large, that helped. There was plenty of good commentary all around about social activism and friendship and how people can grow.
There's kind of a love triangle in that CJ has had a crush on this one guy forever and he starts to express an interest in her, but at the same time everyone in her life thinks she'd be cute with Owen, the new guy at the flower shop. I definitely thought she and Owen had better chemistry, which was the point I guess. Besides getting the Katsuyama family history, we also get CJ's romantic history, which just felt kind of...unnecessary? Like I don't mind that she dated other guys before the book, but I didn't need a run-down of the relationships.

Content warnings: bigotry, racism, foul language, underage drinking and drug use, references to sleeping together and an abortion

The Verdict: Overall, I was just kind of disappointed. With such a pretty cover, I expected the inside to be just as good.