In just a few weeks, Isla and the Happily Ever After will be released and I'll be tiptoeing around various social media outlets until I have a copy in my hands (which probably won't be until about a week after it comes out *sobs*).  Thankfully, there likely isn't anything too big that can be spoiled in ISLA.  But I don't even want any of the adorableness to be spoiled!

So as I sit and wait impatiently for Isla and the Happily Ever After to be mine, I decided to do mini reviews of the other two books in the series: Anna and the French Kiss and Lola and the Boy Next Door (as well as reread the 5 chapters of ISLA I got from NetGalley many times). 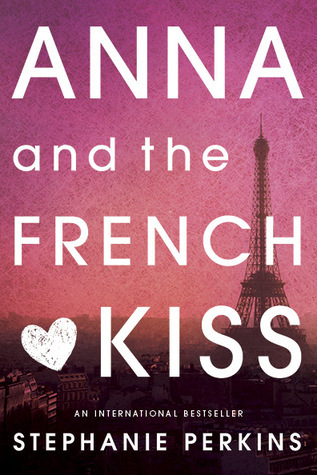 Anna and the French Kiss by Stephanie Perkins
Grade: B+
Summary: Can Anna find love in the City of Light?
Anna is happy in Atlanta. She has a loyal best friend and a crush on her coworker at the movie theater, who is just starting to return her affection. So she's less than thrilled when her father decides to send her to a boarding school in Paris for her senior year. But despite not speaking a word of French, Anna meets some cool new people, including the handsome Étienne St. Clair, who quickly becomes her best friend. Unfortunately, he's taken —and Anna might be, too. Will a year of romantic near misses end with the French kiss she's waiting for?

The Review: ANNA was dreamy and wonderful.  It's set in the best place - PARIS! - and the setting feels entirely real in Perkins's prose.  Sometimes such a famous setting will feel cheap and like cardboard, but not in the case of ANNA's Paris.  I often felt like I was really in the City of Light with Anna and Co.  Anna Oliphant herself is such a wonderful protagonist.  She felt extremely real - mature but still very teenagerish.  She makes some dumb choices but not enough to make her seem immature.  The secondary characters are awesome, too - Rashmi, Josh, Meredith, and, of course, Etienne St. Clair. *sighs* There's a reason he tied for Prom King at the YA Prom!  The French-American boy with the English accent is pretty much universally adored in the book blogger community.  I'm eager to see what I think of Isla's love interest, but I doubt he can top St. Clair as my favorite.
The only thing keeping Anna and the French Kiss from being a 5-star book for me is the inappropriate content.  There's definitely a fair amount of swearing, some drinking (although it's not all underage, since this is Europe), and some romantic content (although nothing more than kissing is shown).

Lola and the Boy Next Door by Stephanie Perkins
Grade: C+
Summary: Lola Nolan is a budding costume designer, and for her, the more outrageous, sparkly, and fun the outfit, the better. And everything is pretty perfect in her life (right down to her hot rocker boyfriend) until the Bell twins, Calliope and Cricket, return to the neighborhood. When Cricket, a gifted inventor, steps out from his twin sister's shadow and back into Lola's life, she must finally reconcile a lifetime of feelings for the boy next door.

The Review: After adoring Anna and the French Kiss, I fully expected to enjoy Lola and the Boy Next Door just as much.  I had both from the library at the same time, so I got to read LOLA right after ANNA.  Unfortunately, LOLA was not a hit, in my opinion.  Lola Nolan came off as very childish and dumb.  She's dating a much older guy, and I just couldn't get into their relationship.  Cricket Bell was the one thing that saved this book (okay, and appearances from Anna and Etienne).
Same language and romance issues that I had with ANNA.  Less drinking, though, thank goodness, although Lola's mother reads tea leaves, tells fortunes, etc.

The Verdict: Didn't live up to my expectations after I loved Anna and the French Kiss so much.  Here's to hoping Isla and the Happily Ever After will be much better!

Buy: Read Between the Lynes  Barnes & Noble
Posted by Emma at 2:58 AM
Email ThisBlogThis!Share to TwitterShare to FacebookShare to Pinterest