Sky in the Deep Blog Tour

Raised to be a warrior, seventeen-year-old Eelyn fights alongside her Aska clansmen in an ancient rivalry against the Riki clan. Her life is brutal but simple: fight and survive. Until the day she sees the impossible on the battlefield—her brother, fighting with the enemy—the brother she watched die five years ago.Faced with her brother's betrayal, she must survive the winter in the mountains with the Riki, in a village where every neighbor is an enemy, every battle scar possibly one she delivered. But when the Riki village is raided by a ruthless clan thought to be a legend, Eelyn is even more desperate to get back to her beloved family.She is given no choice but to trust Fiske, her brother’s friend, who sees her as a threat. They must do the impossible: unite the clans to fight together, or risk being slaughtered one by one. Driven by a love for her clan and her growing love for Fiske, Eelyn must confront her own definition of loyalty and family while daring to put her faith in the people she’s spent her life hating. 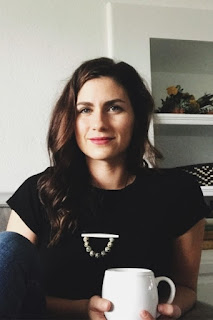 Adrienne Young is a born and bred Texan turned California girl. She is a foodie with a deep love of history and travel and a shameless addiction to coffee. When she’s not writing, you can find her on her yoga mat, scouring antique fairs for old books, sipping wine over long dinners, or disappearing into her favorite art museums. She lives with her documentary filmmaker husband and their four little wildlings beneath the West Coast sun.

“I saw him. I saw Iri.”
He wrapped the torn cloth around my arm, tying it tight. “What are you talking about?”
I pushed his hands from me, crying. “Listen to me! Iri was
here! I saw him!”
His hands finally stilled, confusion lighting in his eyes. “I was fighting a man. He was about to . . .” I shuddered,
remembering how close to death I’d come—closer than I’d ever been. “Iri came out of the fog and saved me. He was with the Riki.” I stood, taking his hand and pulling him toward the tree line. “We have to find him!”
But my father stood like a stone tucked into the earth. His face turned up toward the sky, his eyes blinking against the sunlight.
“Do you hear me? Iri’s alive!” I shouted, holding my arm against my body to calm the violent throbbing around the gash.
His eyes landed on me again, tears gathered at the cor- ners like little white flames. “Sigr. He sent Iri’s soul to save you, Eelyn.”
“What? No.”
“Iri’s made it to Sólbjǫrg.” His words were frightening and delicate, betraying a tenderness my father never showed. He stepped forward, looking down into my eyes with a smile. “Sigr has favored you, Eelyn.”
Mýra stood behind him, her green eyes wide beneath her unraveling auburn braids.
“But—” I choked. “I saw him.”

“You did.” A single tear rolled down my father’s rough cheek and disappeared into his beard. He pulled me into him, wrapping his arms around me, and I closed my eyes, the pain in my arm so great now that I could hardly feel my hand.
I blinked, trying to understand. I had seen him. He was
there.
“We will make a sacrifice tonight.” He let me go before he pressed his hands to my face again. “I don’t think I’ve ever heard you scream for me like that. You scared me, sváss.” A laugh was buried deep in his chest.
“I’m sorry,” I murmured. “I just . . . I thought . . .”
He waited for me to meet his eyes again. “His soul is at peace. Your brother saved your life today. Be happy.” He clapped a hand against my good arm, nearly knocking me down.
I wiped at my wet cheeks with the palm of my hand, turn- ing from the faces that were still watching me. There were very few times I’d cried in front of my clansmen. It made me feel small. Weak, like the early winter grass beneath our boots.
I sniffed back the tears, piecing my face back together as my father nodded in approval. It was what he had taught me—to be strong. To steel myself. He turned back to the field, getting to work, and I followed with Mýra, trying to smooth my ragged breath. To hush the waves crashing in my head. We walked toward our camp, collecting the weapons of fallen Aska warriors along the way. I watched my father

from the corner of my eye, still unable to shake Iri’s face from my mind.
My feet stopped at the edge of a puddle and I looked at my reflection. Dirt spattered across my angled face and neck. Blood dried in long, golden braids. Eyes a frozen blue, like Iri’s. I sucked in a breath, looking up to the thin white clouds brushed across the sky to keep another tear from falling.
“Here,” Mýra called to me from where she was crouched over an Aska woman. She was lying on her side, eyes open and arms extended like she was reaching for us.
I carefully unbuckled her belt and scabbard, piling them with the others before I started on the armor vest. “Did you know her?”
“A little.” Mýra reached down to close the woman’s eyes with her fingertips. She gently brushed the hair back from her face before she began, the words coming softly. “Aska, you have reached your journey’s end.”
In the next breath, I joined with her, saying the ritual words we knew by heart. “We ask Sigr to accept your soul into Sólbjǫrg, where the long line of our people hold torches on the shadowed path.”
My voice faded, letting Mýra speak first. “Take my love to my father and my sister. Ask them to keep watch for me. Tell them my soul follows behind you.”
I closed my eyes as the prayer found a familiar place on my tongue. “Take my love to my mother and my brother. Ask them to keep watch for me. Tell them my soul follows behind you.”

I swallowed down the lump in my throat before I opened my eyes and looked down into the woman’s peaceful face one more time. I hadn’t been able to say the words over Iri’s body the way I had when my mother died, but Sigr had taken him anyway.
“Have you ever seen something like that before?” I whis- pered. “Something that wasn’t real?”
Mýra blinked. “It was real. Iri’s soul is real.”
“But he was older—a man. He spoke to me. He touched
me, Mýra.”
She stood, shifting an armful of axes up onto her shoul- der. “I was there that day, Eelyn. Iri died. I saw it with my own eyes. That was real.” It was the same battle that took Mýra’s sister. We’d been friends before that day, but we hadn’t really needed each other until then.
I remembered it so clearly—the picture of him like a re- flection on ice. Iri’s lifeless body at the bottom of the trench. Lying across the perfect white snow, blood seeping out around him in a melted pool. I could still see his blond hair fanned out around his head, his empty eyes wide open and staring into nothing.
“I know.”
Mýra reached up, squeezing my shoulder. “Then you know it wasn’t Iri—not his flesh.”
I nodded, swallowing hard. I prayed for Iri’s soul every day. If Sigr had sent him to protect me, he really was in Sólbjǫrg—our people’s final sunset. “I knew he would make it.” I breathed through the tightness in my throat.

“We all did.” A small smile lifted on her lips.
I looked back down to the woman lying between us. We would leave her as she was—as she died—with honor. Like we did with all our fallen warriors.
Like we’d left Iri.
“Was he as handsome as he was before?” Mýra’s smile turned wry as her eyes flickered back up to meet mine.
“He was beautiful,” I whispered.
Posted by Emma at 12:00 AM
Email ThisBlogThis!Share to TwitterShare to FacebookShare to Pinterest