Review: Airports, Exes, and Other Things I'm Over 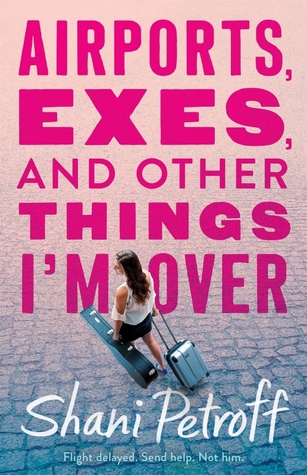 Airports, Exes, and Other Things I'm Over by Shani Petroff
Grade: D+
Release date: May 15, 2018
An ARC was provided by Macmillan in exchange for an honest review.
Summary: A bad storm, two canceled flights, stuck in an airport with a hot stranger and the guy who broke her heart... what could go wrong?
After Sari caught her boyfriend Zev cheating on her, their romantic Florida vacation was ruined. She can't get back to NYC soon enough. Unfortunately, mother nature may have different plans. A huge storm is brewing in the Northeast, and flights all over the country are getting canceled—including Sari's. She winds up stuck at the airport for hours. With Zev!
When another stranded passenger (a hot NYU guy) suggests a connecting flight to Boston, Sari jumps at the chance. But when her mom freaks out about her traveling alone, she has no choice—she has to include Zev, and somehow survive being trapped with the guy who broke her heart!

The Good, the Bad, and the Ugly: Romances that begin at airports can be great fiction fodder. The Statistical Probability of Love at First Sight is one of my favorite examples of this trope. Unfortunately, where that YA fave succeeds, Airports, Exes, and Other Things I'm Over falters.
From the start, I expected Sari and Fitz to have more of a flirtation and an almost-relationship at the very least. Instead, Sari's romantic attentions are entirely focused on her ex who can't take no for an answer. Spoiler alert: no, he technically didn't cheat on her. But the fact that he kept following her and wouldn't take no for an answer kept me from rooting for them. There was little-to-no character development for Sari, Zev, Fitz, or anyone else. And my word, Sari's mother was ridiculously overprotective. She took overprotective YA parent to a whole new level.
I also would've liked more airport culture as opposed to so much drama. YA still tends to be my favorite age category because of how creative and fun it can be, but as of late, the drama in YA books tends to exhaust me. But anyways, airports can be such fascinating places besides causers of stress, so it would've been fun to see how Sari views all of that beyond the stereotypical long lines and unhelpful help desks.
I'm also ready for the heroine-who-plays-guitar-and-sings trope to fade. Musically-talented YA characters are a dime a dozen these days, and I'm ready for some characters with more unique interests. (Or at least, maybe they could play another instrument besides guitar.)

Content warnings: There was some mild language if I remember correctly? Also the ex-boyfriend has a panic attack on the plane.

Buy: Read Between the Lynes  Barnes & Noble
Will I be adding this book to my library?: Nah, son.
Posted by Emma at 12:00 AM
Email ThisBlogThis!Share to TwitterShare to FacebookShare to Pinterest