Review: The Game Can't Love You Back 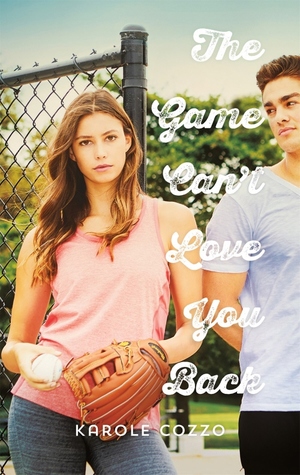 The Game Can't Love You Back by Karole Cozzo
Grade: C+
Release date: May 15, 2018
An ARC was provided by Macmillan in exchange for an honest review.
Summary: Eve is used to being the odd woman out. As the only girl on her school's baseball team, she knows exactly how to put sweaty, macho baseball players in their place, and she's focused on one thing and one thing only—being the best pitcher she can be.
But when a freak accident forces her high school to be absorbed by the neighboring town, Eve has to contend with a new group of guys who aren't used to having a woman on their team. And the new team's star pitcher, Jamie, has no interest in being ousted from his throne. He can't afford to give up his starting slot to a new pitcher—even worse, to a girl.
As the competition between Jamie and Eve starts to heat up, so does their attraction to each other. Can they keep their heads in the game, or will they end up getting played?

The Good, the Bad, and the Ugly: YA sports books are often fluffy fun. I don't actively seek them out, but I have read a few (Miranda Kenneally's series and Being Sloane Jacobs come to mind).
When writing a romance involving rival athletes, an author has to be careful that the guy doesn't come across as a sexist jerk. The synopsis seemed to imply to me that Jamie was going to be that way, so I was a bit tentative. However, his hatred-ish feelings for Eve always came across more as jealousy that she was given special treatment and that he wasn't viewed as the best anymore, which are both easier things to correct through character development.
The main plot threads involve baseball, romance, and Jamie's family. Jamie's home life isn't the best, but his mom and sister are great, and it was fun to see a YA protagonist hold down a typical teen job. I also liked that Eve's family never discouraged her from being athletic or playing on the guys' team.
I had trouble buying into the beginning of Eve and Jamie's attraction to each other. I really like enemies-to-lovers stories, but there's gotta be a clearer switch for me than just "holy crap I find this other person super attractive what is going on." And I was annoyed with Jamie being portrayed as the typical womanizing love interest. It's kinda old.

Content warning: I feel like I remember some foul language? And then there's lots of making out. Also some misogynistic bullying targeted at Eve that borders on crude at times.

The Verdict: Did I enjoy myself while reading it? Yes. Would I reread it? Probably not.

Buy: Read Between the Lynes  Barnes & Noble
Will I be adding this book to my library?: Hmm...probs not.
Posted by Emma at 12:00 AM
Email ThisBlogThis!Share to TwitterShare to FacebookShare to Pinterest