Hold on to the Memories, They Will Hold on to You

It's been two days, and I'm still not sure how to put my evening into words. Everything about the Reputation Stadium Tour feels like a wonderful blur. I have videos and pictures, but I'm also holding on tight to my memories because I never want to forget Taylor Swift's latest tour. 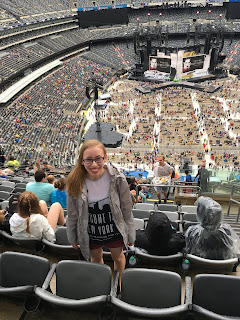 We got really lucky because it poured the previous night, but it was only sporadic throughout our show. Charli XCX opened, and I didn't know most of the stuff she sang except for "Boom Clap" and her covers of "Fancy" and "I Love It." Then Camila Cabello came on, and I knew a little more of her set. Plus she has a really good voice.

"Obsessed" by Mariah Carey and Joan Jett's "Bad Reputation" played before Taylor arrived, and honestly, what a mood.

"I Did Something Bad" was next, and it was honestly one of the best experiences. Like, it's a solid jam by itself, but Taylor made it such an outstanding production on tour.

She had light-up bracelets for everyone like with last tour, and my favorite moments were when they were pink during "Love Story" and then crowns formed on parts of the crowd during "King of My Heart." And the crowd absolutely glittered during "Shake It Off," which was so magical. 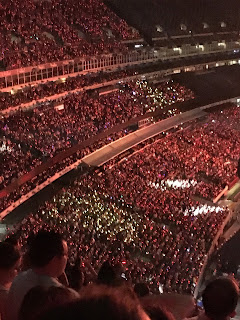 (See? The yellow lights were the crowns.)

She played "So It Goes..." instead of "Dancing With Our Hands Tied," which I didn't like. I love DWOHT, so I was really looking forward to the acoustic version of that. But then she played "Enchanted" as the surprise song, and I loved every minute. The last two tours, the surprise songs at my shows were "Fearless" and "Fifteen" so it was great to get a song from a different album, especially one I love so much.

The pyro during "Don't Blame Me" was just as wild as it was during "I Did Something Bad." I could literally feel the heat on my face. There were a bunch of fireworks too, which was epic. 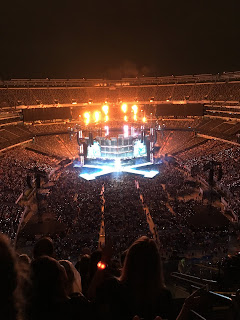 I teared up during "Long Live/New Year's Day" on the piano, and then cried during the video of one of her poems. 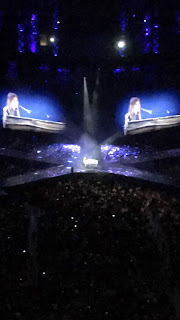 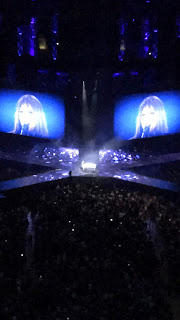 (Look at my fave. She was so happy with us.)

"Getaway Car" and "Call It What You Want" were everything I wanted them to be.

And then she closed with a mash-up of two of her songs with the longest titles: "We Are Never Ever Getting Back Together/This Is Why We Can't Have Nice Things."

Getting back to New York was very slow, but at least we didn't have to sit in traffic. I was very tired the next day at work, though, haha.

Overall, though, I'm so glad I bought tickets after all and was able to go. I know I would've regretted not going with Taylor so close, and I'm very grateful that I had a friend who was willing to come visit and go with me.
Posted by Emma at 12:00 AM
Email ThisBlogThis!Share to TwitterShare to FacebookShare to Pinterest