What have I been up to in the last month? You're about to find out.

1. I started a project to organize and clear out our reprints files drawer because it was getting ridiculously overcrowded.
2. More slugging! I worked on the third Great Shelby Holmes book, We Are Not Yet Equal. The Splintered Light, Art in Action, and Imprison the Sky.
3. I worked with a lot of picture book proofs, assembling them when they arrived from the printer and then copying color comments if we were sending them back out.
4. On Thursday, I got to go to Fall 2019 launch, where all of the editors talked up their books that will publish next fall. Fall is usually a little quieter, but there's some good stuff coming including Emery Lord's next book and some super cute picture books.
5. My internship has been extended through at least mid-December! I am over the moon with joy and relief.

1. I used UberEats for the first time ever twice in one weekend. I got grilled cheese and tomato soup from Creamline (at the Chelsea Market) for lunch on a cloudy Saturday, and then ordered cake from The Cake Pusher on Sunday evening. Both were just what I needed. (And that cake was so good that I had to order it again at the end of the month.)
2. Bistango - an Italian place in Midtown East. Pretty good, but definitely fancier than I can afford most of the time.
3. Doughnut Pub in Chelsea - Highly recommend. Cute, classic, and super tasty. 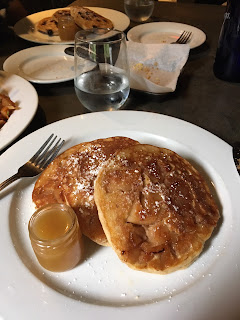 4. Friend of a Farmer - a restaurant near Union Square and Gramercy Park. SO GOOD. We went for brunch, and I wanted to stay for lunch and dinner.
5. Brunch at Maman - I finally got to try their waffles, and they were so good! And I got their Pink Lady cocktail, too, and it was so yummy. (Sparkling wine with elderflower rose lemonade.)

1. I went to Lauren Spieller's launch event down at Books of Wonder. It was my first Books of Wonder author event, which was exciting. They had champagne and cupcakes, and I got Lauren's book signed, as well as one by Dahlia Adler (she was sort of the moderator/in conversation with Lauren).
2. I took Elizabeth to Books of Wonder when she visited, and I got another book in the Anne of Green Gables series.

1. I saw Beautiful: The Carole King Musical again because Melissa Benoist is starring in it this summer. Sadly, she and most of the cast had a party that night, so only three of them came to the stage door. I had been dying to meet her, as well as the actors that played Cynthia and Barry, but alas.
2. Nori (from ReadWriteLove28) and I met up for dinner and then watched the Fourth of July fireworks together. She was great fun to hang out with, but this is the only time I'm going to the NYC fireworks. It's too much work, especially when you're as short as me and tall people think it's okay to stand in the front rows. :P 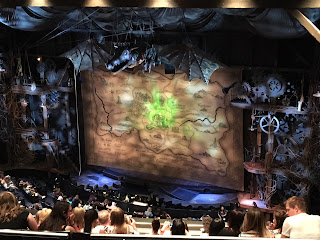 3. I saw Wicked, and it was everything I hoped it would be. I got actual chills during "No Good Deed."
4. For my birthday/my parents' anniversary, we saw The Phantom of the Opera which was pretty spectacular.
5. I saw Mamma Mia 2, and the movie itself was AMAZING.
6. My friend Elizabeth came to town for the event in item #7, but while she was here, we saw Anastasia on Broadway, since that was the musical she was dying to see.
7. I GOT TO SEE THE REPUTATION TOUR! I went with a friend to the third show, and it was so epic. The only things I didn't like were a) the sporadic rain, b) Taylor played "So It Goes" instead of "Dancing With Our Hands Tied," and c) some jerk in Chicago called me during "Enchanted" (the surprise song) so my video got cut off. I did a whole post about the concert a couple days ago, and you can find it here.
8. Then, two days later, I saw Aladdin, thanks to my dorm. (They got discounted tickets for this show and Wicked.)

1. The Met Cloisters - I went up here for a bit on the Fourth. It's much smaller than the main Met campus, but still cool. The architecture and cloisters gardens are the best. If it hadn't been so hot and I had had a friend with me, I probably would've wandered around the park as well. 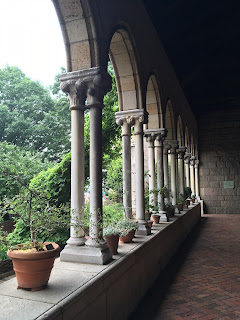 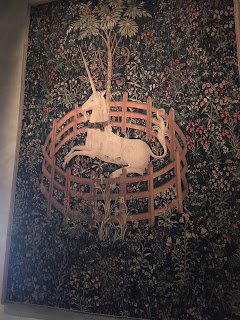 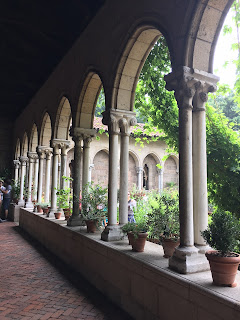 2. Red Hook Winery in Brooklyn - My dorm did an event where we did a tasting here, and it was fun! We took the train down to Wall Street, then took the ferry across the river. I liked the red wine I tried best, which was surprising because I tend to prefer whites and rosés. 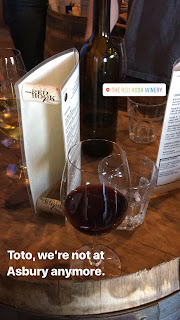 3. The Central Park Zoo - I took a spontaneous trip up there one Sunday afternoon. For how much it cost to get in, I'm not sure it's worth it...but it was fun to see snow leopards and red pandas. 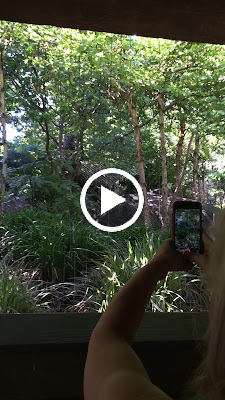 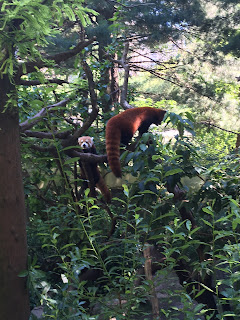 4. Brooklyn Heights - So I'm moving to another dorm in Brooklyn in a few weeks, and we got to see my new neighborhood. Y'all. I'm so close to the river, and there's a big supermarket across the street, and then there's a street nearby with restaurants and a Starbucks and a Francesca's. I'm so excited for this next step in my New York adventure.
5. TriBeCa - I had brunch at the Maman location down there, and Elizabeth and I walked around a little bit. We even walked past Taylor Swift's apartment building! (But we did not wait outside for her like a bunch of people and paps were. Cause that's crossing a line.)

So yeah, that's month two! I think month three might slow down in some respects, but I'm excited to see what my new neighborhood holds and how my internship will grow as we move into fall. I've got a few things planned for the next few months and tons of museums to still explore. And as always, I'm open to suggestions and recommendations (especially for restaurants).
Posted by Emma at 12:00 AM
Email ThisBlogThis!Share to TwitterShare to FacebookShare to Pinterest