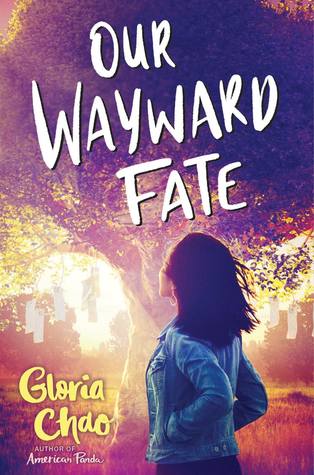 Our Wayward Fate by Gloria Chao
Grade: C-
Release date: October 15, 2019
An e-galley was provided by Simon Pulse via NetGalley in exchange for an honest review.
Summary: Seventeen-year-old Ali Chu knows that as the only Asian person at her school in middle-of-nowhere Indiana, she must be bland as white toast to survive. This means swapping her congee lunch for PB&Js, ignoring the clueless racism from her classmates and teachers, and keeping her mouth shut when people wrongly call her Allie instead of her actual name, Ah-lee, after the mountain in Taiwan.
Her autopilot existence is disrupted when she finds out that Chase Yu, the new kid in school, is also Taiwanese. Despite some initial resistance due to the they belong together whispers, Ali and Chase soon spark a chemistry rooted in competitive martial arts, joking in two languages, and, most importantly, pushing back against the discrimination they face.
But when Ali’s mom finds out about the relationship, she forces Ali to end it. As Ali covertly digs into the why behind her mother’s disapproval, she uncovers secrets about her family and Chase that force her to question everything she thought she knew about life, love, and her unknowable future.
Snippets of a love story from nineteenth-century China (a retelling of the Chinese folktale The Butterfly Lovers) are interspersed with Ali’s narrative and intertwined with her fate.

The Good, the Bad, and the Ugly: Listen, I love the idea of exploring what it's like to be the only minority in your tiny town. But I think Our Wayward Fate went wrong in a bunch of ways.
First of all, while I adore a good romance, this one is SUPER insta-lovey. At first Ali wants to resist dating Chase since they're only two Chinese-American students in their school. But, by the very next day, she's aggressively kissing him, and they start dating and seeing each other in secret super fast. There was no believable chemistry. If you're going to make your romance one stemming from insta-love/insta-lust, then readers have to buy into it. All Ali and Chase did was argue a little, and then they were making out and sneaking out to see each other.
My next quibble is a little nebulous, just because I'm concerned my white privilege colors how I view the incidents. However, I felt a lot of the racism and microaggressions were TOO stereotypical and exaggerated. I would've liked to see some new ones, ones that you don't hear about on Twitter/social media a lot, or at least a more nuanced approach to them. I grew up in the Midwest, and it's pretty white but there are also a fair number of minorities spread across the prairies, and so I felt like the microaggressions needed to be more subtle but still there (because they definitely exist). I also felt that the mom came across as too much of a stereotypical tiger mom (which, after Chao's last book, felt repetitive) and the dad reminded me too much of the kind of absentee dad in It's Not Like It's a Secret.

Content warnings: foul language (a lot of it), microaggressions and some more overt racism

The Verdict: I am the epitome of a sad emoji.