What We Did in Asheville

It's been, like, five gazillion years since my family went on our short vacation to Asheville, North Carolina, and I still haven't done a proper write-up on the trip. So here I am, about to tell you every detail.

We stayed at the Renaissance Hotel, which is just a few blocks from the main downtown area. It was super lovely, and we had a great view of the mountains. The TV was also Netflix-enabled so we watched a bunch of Great British Bake-Off, lol. There was a good-sized parking lot, which is important because Asheville is very hilly. Once you get to a parking garage in the downtown area, it's a bit more doable, but otherwise, I wouldn't recommend walking to and from your hotel (unless you're even closer to downtown than we were).

When my family travels, we EAT. We've also really gotten into food tours, so of course we did one in Asheville. I'll include the details of that in the next section and focus mainly on other meals/food here.

Our first stop in town was for lunch at a brewery/eatery called Rise Above Deli. We drank local sodas, and I had the yummiest falafel sliders that came with a fruit salad. 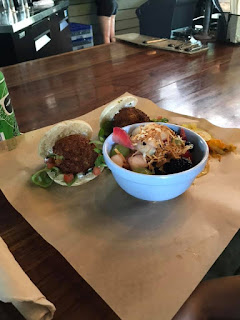 Then we went to one of my top destinations for the trip: Baked Pie Company. It should be so, so evident by now that I love pie. What Baked does differently than your average pie shop is that you can have a pie flight, which is three different slices plus a little cup of ice cream. Additionally, their Woodfin shop is so homey and cute. I wish we could've gone again in our time there, but we had so much else on our plate (pun unintended). Definitely a must if we ever go back. 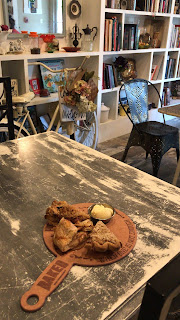 We were pretty boring and got breakfast at Starbucks most of the mornings, but our last morning in town, we did breakfast at Over Easy Cafe. The pancakes I got were MASSIVE. Definitely bigger than my head. ;P But very yummy all the same.

One night for dinner we went to the Tupelo Honey restaurant, which meant we got complimentary biscuits (obviously, I was in heaven), and then my mom and I split fried chicken for actual dinner. 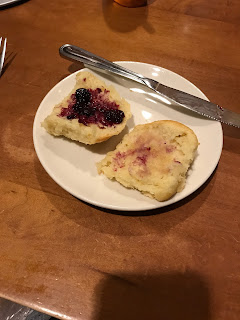 For my birthday dinner, we went to a nice Italian restaurant at the Grove Arcade. It was called Modesto, and I had a white fish with risotto on the side. One of the main reasons I wanted to go, though, was their cocktail menu. They had one called a Stormy Old-Fashioned, which meant it had ginger, peach, brown sugar, and bourbon. I lived in Kentucky for four years, only during one of which could I legally drink alcohol, but somehow I've developed a taste for bourbon. 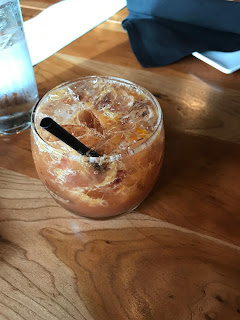 And then for dessert that night, we went to a lovely local place I'd heard about called Sunshine Sammies. They do ice cream sandwiches but also just some plum amazing ice cream. I got key lime (2019 has been the year of Emma wanting everything key lime), and I don't think I'll ever get to eat such yummy ice cream again. 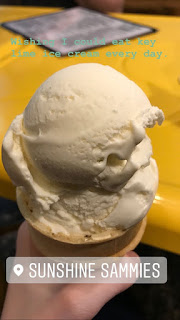 I'll end this section by saying that there were a bunch of restaurants I would've loved to try that we didn't have time for, especially at the Grove Arcade.

Day one in Asheville, like I said, we got there around lunchtime. We walked around the downtown area and shops for a bit in the early afternoon. We went to the famous Malaprop's Bookstore. I managed to find a middle grade book to buy, but by and large, they didn't have most of the YA books I wanted, which was a tad surprising. I guess I'm still spoiled by Joseph-Beth's in Lexington and Books of Wonder in NYC.

Then, for our evening activity, we went to a board game cafe called Well Played. I'd heard about it on Asheville blog posts and thought it sounded like the best thing ever. And it was so much fun! We got local ciders to start the night and a snack bowl of popcorns. My dad and I ate grilled mac and cheese sandwiches for dinner, and I had a hot chocolate before we left. We played a bunch of games - Zooloretto (which was new to all of us), Exploding Kittens (always a good time), Trivial Pursuit, and Clue (my fave). We were there for probably close to four hours. Definitely one of my top recommendations if you're ever in Asheville. 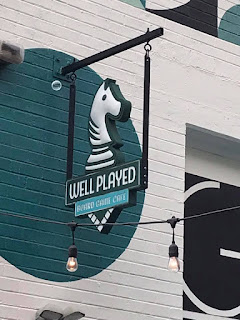 The next day was our Biltmore day. 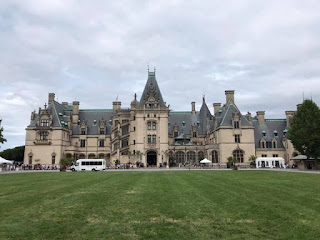 We got to the estate in the morning, rented headsets, and toured the house. We saw the gardens and conservatory next (they had a special train thing my dad wanted to see), and then went down to Antler Hill Village where we had lunch at Cedric's Tavern (there're a lot of dining options on the estate grounds, though all are fairly pricey), walked around the village shops and grounds, and then went over to the winery. You get to do a free tasting with your ticketed entry to the house, and we were very into that idea. You got to try as many glasses as you want, though they recommend a maximum of eight, and I think I only did four or five.
Sidebar about Cedric's Tavern: we got pretzel rolls as an appetizer, and they came with mustard butter, and it was so good that my mom begged the chef for the recipe, and now she regularly whips some up.

Monday, we drove up to Mount Mitchell...and I stayed in the car, lol. I hadn't brought warm enough pants and it was chilly up there, so I didn't feel up to the final leg up to the lookout. My parents enjoyed it, though. That afternoon, though, was our food tour. And wow, I love a good food tour.

We started off with bruschetta and rosé at Santé Wine Bar & Tap Room.
Then we went to the Chocolate Fetish where we learned about their process and tried five gazillion chocolates.
After that was the Blue Dream Curry House. My spicy tolerance is basically a zero, but the Panang curry wasn't too hot, and it was tempered by a lovely cider. 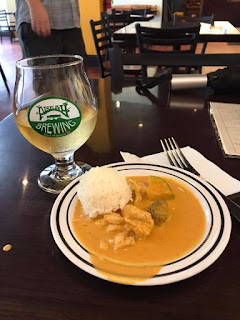 Then at Chestnut (which is a super nice, super popular place), we got fish and kettle chips, plus ginger beer. I love fried fish and tartar sauce, so this was definitely a favorite.

Next we went to a hole-in-the-wall taco place (that apparently Martha Stewart made famous). I liked the chips and queso, but the fried shrimp tacos were just ok. I like fried shrimp, but I'm soooo picky about my tacos.

Next up was the Social Lounge cocktail bar. We got to try a yummy ravioli there as well as something that is now probably my favorite cocktail: the Buttercup. It's vanilla vodka, pineapple, lemon, vanilla-cinnamon, and rosemary. Definitely going back there if we ever return to Asheville. 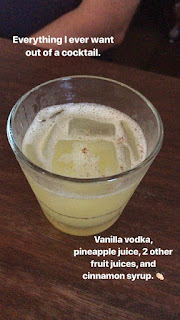 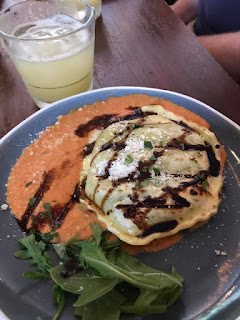 Our next-to-last stop is a place whose name I've forgotten. The cocktail there was a bit Koolaid-ish, and I didn't love the...pork belly over rice pudding-y dish. (Can you tell it wasn't memorable enough for me?)
The last stop was the honey shop, the Asheville Bee Charmer, and we got to sample as many honeys as we wanted, and it was divine. And they had the cutest honey dispensers at the tasting station! Pretty sure my dad bought one, though I don't think we've used it yet, haha.

On my birthday, we went to the WNC Nature Center. Most of the animals were off sleeping, but we did get to watch otters at lunchtime and saw a few red pandas. <3

So I've collected smashed pennies since we went to New York City back in 2008. I've filled almost two whole little booklets full of them, especially because friends and family will send me some from their vacations too. I got two at the WNC Nature Center.

I love a good stuffed animal, and WNC had otters, and I loved watching the otters' feeding time, so I got one and named her Charlotte (since Asheville wasn't as good of a name).

I'm super into getting spirit jerseys from the places we've visited (I wear my Quebec one ALL the time, even though it's now stained with paints from my roommate who got them all over our room, ugh), but I forgot to look for one in Asheville. I found them on the Biltmore website, though, and I'm ordering one soon.

SO, to sum it all up:
~visit Biltmore, Well Played Board Game Cafe, Malaprop's Bookstore, and the WNC Nature Center.
~Shop at The Chocolate Fetish and the Asheville Bee Charmer, and some of the other kitschy little stores.
~Eat at Modesto, Blue Dream Curry House, Over Easy Cafe, and Chestnut. (If you want more recs, hit me up. Our food tour guide gave us a whole postcard with more suggestions.)
~Get desserts at Baked Pie Company and Sunshine Sammies.
~Drink (if you're of age) at the Biltmore Winery, Modesto, and the Social Lounge.


Asheville is also great for super outdoorsy people because there's a lot of hiking and nature recreation you can do. We mainly went because of Biltmore, though.

And if you have any more Asheville recommendations, feel free to leave them in the comments below!
Posted by Emma at 12:00 AM
Email ThisBlogThis!Share to TwitterShare to FacebookShare to Pinterest