W.W. Hale the Fifth - What the Heck Is His Name?

If you've read Ally Carter's Heist Society trilogy, you'll know W.W. Hale the Fifth, or Hale as most of the characters call him.
One of the trilogy's running jokes is that few people know what the W's stand for, and Kat tries to guess on several occasions.

As I started rereading the trilogy again in December, I came across the scene in the first book where Kat discusses this. 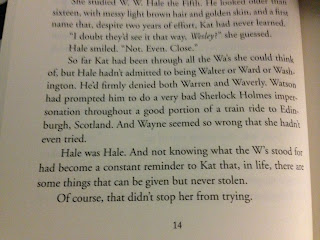 I had to text my best friend, Kate, after rereading this part. She's the one who introduced me to Ally Carter's books, and she knows them as well as I do.

My text included the above picture and I said,

"Lol what if Wayne is actually Hale's name and it was hiding in plain sight this entire time because Kat didn't think it was worth trying."

Kate's response? Wouldn't that be something.
Then I got a teeny bit mad at Ally, saying she'd take the secret to her grave. Kate wondered if Hale doesn't have a name. I wondered if the W.W. Hales' names were literally the initials. Kate said that would make a lot of sense. Then I got a little bit madder at Ally, so Kate told me to just give Hale a name.

So I hereby decree that W.W. Hale the Fifth's name is Waldo.
Posted by Emma at 12:00 AM
Email ThisBlogThis!Share to TwitterShare to FacebookShare to Pinterest