There may be some spoilers for Hold Me Like a Breath. Proceed with caution. 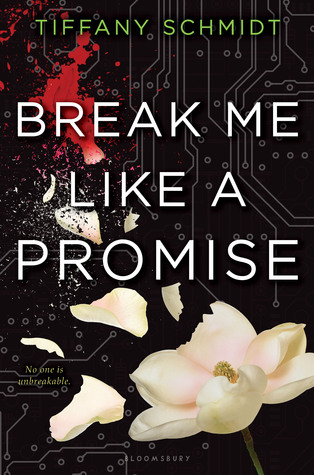 Break Me Like a Promise by Tiffany Schmidt
Grade: A-
Release date: June 7, 2016
An ARC was provided by Bloomsbury in exchange for review consideration.
Summary: All Magnolia Vickers has ever wanted was to follow her father’s path as head of the Family Business. But new legislation is poised to destroy the Family’s operations in the black-market organ trade and Maggie’s recent behavior has wrecked the business-savvy reputation she’s worked her whole life to build.
She’s given an ultimatum: shape up or step aside.
Then Maggie messes up: she downloads a virus onto her father’s computer, and must sneak it off-estate for repair. When Alex, a tech whiz, uncovers the type of information on the machine, he offers Maggie a choice: her Family can give him a kidney, or he’ll irreparably scramble the data. Maggie agrees, but has no intention of keeping her promise or ever seeing him again. That night Alex shows up at her Family estate with copies of confidential Family files and a shocking revelation—the kidney is for him.
The Vickers aren’t willing to let Alex out of their sight, so he moves onto their estate and Maggie is assigned to be his keeper. A task she resents and he enjoys making as challenging as possible. But procuring black market organs is becoming increasingly difficult, and as Alex’s health declines, she’s surprised to find herself falling for him.
Like it or not, Maggie must accept that if she wants to save Alex’s life and carve out a place in the new legalized organ business, she’s going to have to fight for both.


The Good, the Bad, and the Ugly: I didn't realize how much I wanted to return to the Once Upon a Crime Family world until I started reading Break Me Like a Promise. It's a world of medical and technological jargon, but still altogether fun because how many of us are part of organized crime families? (Don't answer that.)
I definitely felt like the two main plots stayed strong throughout the entire book. I loved how a lot of things resolved...and how certain things remained open for Maggie, Penny, and Char to deal with. It felt a lot like a strategy, people maneuvering where they needed to be and fighting for the top, but it wasn't as dirty as in, for example, The Fixer. The Family is a close unit and they use reason and authority to get what they want instead of blackmailing.
I actually really enjoyed Maggie as a character. She is strong yet broken, and she's flawed but she grows and learns. She's motivated and a bit calculating - definitely a Slytherin. Despite that, she cares and loves deeply. She loved Carter Landlow, and she is mourning him. The back story development we get on them felt necessary, and I just wanted to hug Maggie so much during those scenes (except she probably wouldn't be too receptive of those hugs). I was a little less connected to Alex, and I wanted more in-depth connection to him. He felt a bit one-dimensional at times.
Which brings me to the romance; I knew an attraction would form between Maggie and Alex, and I didn't buy into it beyond that. I'm very critical of romances, and they've got to be really good to get my approval. I needed a few more scenes earlier on with romantic tension just so I could ship Maggie and Alex.
Violence, sexual content, and language were all extremely mild; I didn't catch more than one or two curses.

The Verdict: Better than Hold Me Like a Breath, but because of the romance, this is only a 4-star read.

Buy: Read Between the Lynes  Barnes & Noble
Will I be adding this book to my library?: It's on my Secret Sister wishlist, so, yes, I'd like to!
Posted by Emma at 12:00 AM
Email ThisBlogThis!Share to TwitterShare to FacebookShare to Pinterest