Why I Love Since You've Been Gone

I want you to think of a book. Not just any book, but one that will always stay with you. One that, when you think of it, you get a warm nostalgic feeling in the pit of your stomach. It puts a smile on your face, even on the toughest of days. It's one of those books where, when you finish it, you emerge feeling as if you've just woken from a good sleep. You walk around for a bit in a drowsy stupor and it's as if the book is a wonderful dream you're sad to have left.
I have a couple books that are like that for me. One of them is Since You've Been Gone by Morgan Matson, and I'm going to tell you why I love it so much. 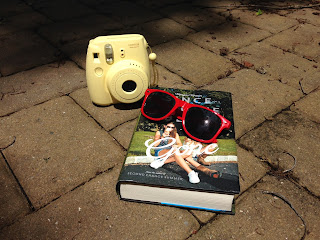 1. The characters
I feel Emily on a personal level. She's a follower, not a leader. She's the friend who doesn't do daring things. She feels lost when she doesn't have her best friend in social settings. And Sloane was more of a floating presence than a present character (despite the flashback scenes), but I still got to know her so well.

2. Frank Porter
He's in my top five book boyfriends, y'all. (Along with Max Watson, Clark McCallister, Matt Finch, and Gilbert Blythe, in case you were wondering.) He's smart, driven, and genuinely nice. He's not a "nice guy"; he's actually a nice guy. He pushes Emily to be the best she can be, and he has a bit of a character arc himself. (Btw, y'all, his birthday is July 19, so guess what I'll be celebrating that day?)

3. The summer feel
I love a good summer vacation book. An especially good one is something I can read any time of year and it'll feel like summer. Since You've Been Gone is one of those. It makes me want ice cream, a good book, and sunscreen.

4. The references to Morgan's other books
So I didn't realize it was there until I saw Morgan and another blogger tweeting about it, but once you've read The Unexpected Everything, go back and check the scene when Emily is talking to the guy who works at IndoorXtreme. And then of course Amy and Roger are referenced during a couple scenes.

"'You just seemed so...diminished,' he said after a moment. 'Like you were hoping nobody would see you.'
I kept my eyes on his, not letting myself look away. 'And now?'
He looked right back at me as he gave me a half smile. 'You're the brightest thing in the room,' he said. He lifted his hand from my waist, and slowly, carefully brushed a stray lock of hair from my cheek. 'You shine.'"

"It was like swimming under the stars, like sleeping outside, like climbing a tree in the dark and seeing the view. It was scary and safe and peaceful and exciting, all at the same time. It was the way I felt when I was with him. Like a well-ordered universe."

"Nothing worth doing is easy. Especially not in the beginning."

"You know how it ends. You promise to stay in touch with people, but it doesn't work out. It never does. And you forget about what the friendship used to be like, why you liked that person."

6. The playlists
I love when books include something extra. Since You've Been Gone has Emily's and Frank's running playlists, and the paperback edition has a bonus one. I took the time to put all of these playlists together on Spotify. Now, obviously they're missing all Taylor Swift songs; they're also missing Curtis Anderson and The Henry Gales stuff since those are made-up people. But, anyways, I'm including the playlists below for your enjoyment. I will warn you - a couple songs on Mix #14 and Emily & Frank are explicit.


Pick Up Your Pace, Porter! (Even More Songs About Trucks):

I'll leave you with bookstore links because, like I established on my TSOMAY post, I'm not above shoving books at people.

Read Between the Lynes  Barnes & Noble  Amazon
Posted by Emma at 12:00 AM
Email ThisBlogThis!Share to TwitterShare to FacebookShare to Pinterest
Labels: why i love