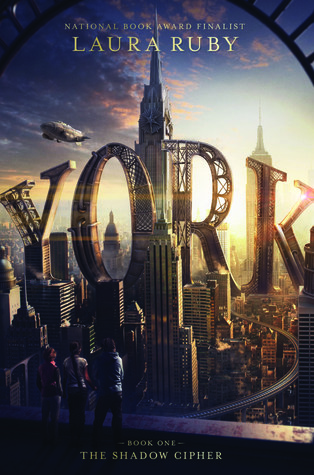 The Shadow Cipher by Laura Ruby
Grade: B
Summary: It was 1798 when the Morningstarr twins arrived in New York with a vision for a magnificent city: towering skyscrapers, dazzling machines, and winding train lines, all running on technology no one had ever seen before. Fifty-seven years later, the enigmatic architects disappeared, leaving behind for the people of New York the Old York Cipher—a puzzle laid into the shining city they constructed, at the end of which was promised a treasure beyond all imagining. By the present day, however, the puzzle has never been solved, and the greatest mystery of the modern world is little more than a tourist attraction.
Tess and Theo Biedermann and their friend Jaime Cruz live in a Morningstarr apartment house—until a real estate developer announces that the city has agreed to sell him the five remaining Morningstarr buildings. Their likely destruction means the end of a dream long-held by the people of New York. And if Tess, Theo and Jaime want to save their home, they have to prove that the Old York Cipher is real. Which means they have to solve it.
The Good, the Bad, and the Ugly: If you grew up reading The 39 Clues or The Mysterious Benedict Society, this book is for you. (Or if you have a middle schooler who loves those books, give them this one!)
With a narrative voice somewhere between middle grade and young adult but with a plot that will probably interest middle grade readers more, The Shadow Cipher is inventive, mysterious, and fun. It plays with New York history and present in such a fun way, and I love how author Laura Ruby left some things the same, tweaked others a little, and invented all new things.
The book is narrated by the three main characters - Tess, Theo, and Jaime. Their narrative voices aren't very distinct, and the story is told in third-person so I constantly had to check to see who was actually narrating a chapter. They each have bits of personalities that start to shine through, but The Shadow Cipher is more plot-focused. I do think the twins' Aunt Esther will play a big part in future books, and I'm excited to see how. The antagonists were a bit typical of middle grade fiction, but I think the cipher itself will keep readers guessing. It's not one that readers can necessarily piece together for themselves first, which adds fun since no one knows what will happen.

The Verdict: The adventure is only beginning.