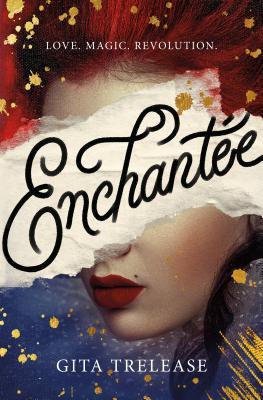 Enchantée by Gita Trelease
Grade: C
An ARC was provided by Miss Print's ARC Adoption Program in exchange for an honest review.
Summary: When smallpox kills her parents, seventeen-year-old Camille Durbonne must find a way to provide for her frail sister while managing her volatile brother. Relying on petty magic--la magie ordinaire--Camille painstakingly transforms scraps of metal into money to buy the food and medicine they need. But when the coins won't hold their shape and her brother disappears with the family's savings, Camille must pursue a richer, more dangerous mark: the glittering court of Louis XVI and Marie Antoinette.
With the dark magic she learned from her mother, Camille transforms herself into 'the Baroness de la Fontaine' and is swept up into life at the Palace of Versailles, where aristocrats both fear and hunger for la magie. Her resentment of the rich at odds with the allure of glamour and excess, Camille is astonished to find that her would-be suitor Lazare, a handsome young inventor whom she thought shared her dreams of liberty, is also living a double life.
As the Baroness de la Fontaine, Camille gambles at cards and flirts, desperate to maintain her place at court and keep herself and her sister off the streets. But la magie has its costs. When a scheming courtier blackmails her and Lazare's affections shift, Camille loses control of her secrets. Then revolution erupts, and she must choose--love or loyalty, democracy or aristocracy, reality or la magie--before Paris burns.

The Good, the Bad, and the Ugly: While the story itself is interesting, I found myself willing to put Enchantée down for long periods of time, which is never a good sign.
I think one of my biggest issues was that I was never invested in the characters or worried for them. I knew she would be attracted to Lazare, but I wanted to feel their connection. The book stretched too long with too few emotions behind actions.
I did like learning a little more about how Versailles worked during the time of Louis XVI and Marie Antoinette. But the magic that seemed so vital to the story felt underdeveloped. I wasn't quite sure where magic fit into Enchantée's world, and I felt like it could have a much bigger part at the royal court.
Also, that chandler's apprentice was so random. He had the first chapter, then didn't appear again for several pages but never seemed to serve an actual purpose. I was certain he'd somehow discover Camille's secret or be connected to the Viscomte. But alas, he wasn't.
I did like the hot air balloon scenes. I think that and Lazare's back story should have been explored even more. And it just really needed more about the magic, not just Camille using it!

The Verdict: Could've been so much better. I feel like such a black sheep about this title, honestly.

Buy: Read Between the Lynes  Barnes & Noble
Will I be adding this book to my library?: I don't think so?
Posted by Emma at 12:00 AM
Email ThisBlogThis!Share to TwitterShare to FacebookShare to Pinterest