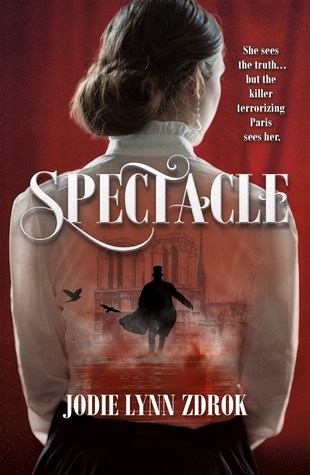 Spectacle by Jodie Lynn Zdrok
Grade: C+
An e-galley was provided by Tor Teen via NetGalley in exchange for an honest review.
Summary: Paris, 1887.

Sixteen-year-old Nathalie Baudin writes the daily morgue column for Le Petit Journal. Her job is to summarize each day's new arrivals, a task she finds both fascinating and routine. That is, until the day she has a vision of the newest body, a young woman, being murdered--from the perspective of the murderer himself.

When the body of another woman is retrieved from the Seine days later, Paris begins to buzz with rumors that this victim may not be the last. Nathalie's search for answers sends her down a long, twisty road involving her mentally ill aunt, a brilliant but deluded scientist, and eventually into the Parisian Catacombs. As the killer continues to haunt the streets of Paris, it becomes clear that Nathalie's strange new ability may make her the only one who can discover the killer's identity--and she'll have to do it before she becomes a target herself.

The Good, the Bad, and the Ugly: This is the type of historical fiction I look for, the ones set in a time rarely touched on and about a subject most fiction doesn't cover. It was utterly fascinating to me that so many people turned out to the Paris morgue every day to see the dead John and Jane Does.
Overall, though, Spectacle suffered from a lack of truly compelling characters. I wanted Nathalie to survive, but other than that, I found myself not caring about her life or what happened to the other characters. Which is sad because her aunt, Brigitte, was a fairly tragic character who deserved better.
Also the special abilities thing went in a really weird direction that was kind of super power-esque but not really how I would've liked it to be. Things about how the powers actually came to be were very vague and confusing.
Nathalie had a crush on this guy who worked at the morgue, but there's not really a romance, although there are random little scenes that made it feel like Zdrok was writing towards one. I didn't really want a romance - with that guy at least - because he was too old for Nathalie.

Content warnings: gore, murder, stalkings, some occult-type stuff (a bit more of that than I would've liked), scenes in an insane asylum.

The Verdict: Good but not spectacular.