Review: What You Always Wanted 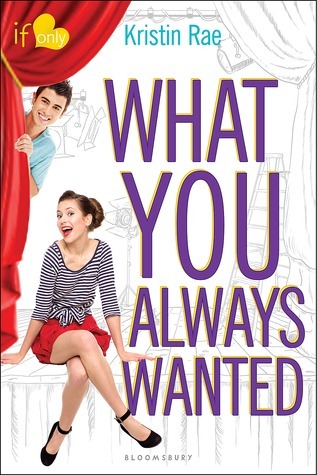 What You Always Wanted by Kristin Rae
Grade: A-
Release date: March 29, 2016
An e-galley was provided by the publisher in exchange for review consideration.
Summary: If Only . . . he was the boy she's been dreaming of. The If Only line continues in this fun high school theater-themed romance!
Drama girl Maddie Brooks has always had high standards for guys. But she has yet to find one who can live up to the romantic, classic Hollywood heartthrobs, especially the dreamy song-and-dance man Gene Kelly. When Maddie begins to carpool with Jesse Morales, her new neighbor and star pitcher of the baseball team, she's struck by his wit, good looks, and love for his family--but a guy so into sports is definitely not her style. Then Maddie discovers that Jesse was raised as a dancer and still practices in the community theater dance studio to keep in shape. Perhaps her perfect dream guy exists after all! But when it becomes clear that baseball--not dance--is Jessie's passion, can Maddie find a way to let her dream guy go and appreciate the charms of the amazing guy in front of her?

The Good, the Bad, and the Ugly: Gah, I just love cute, swoonworthy contemporary YA. I love characters with substance and friendships and genuinely nice love interests. And let me tell you - Kristin Rae writes great love interests. Darren from Wish You Were Italian is so adorable, and I loved that Jesse was just as fleshed-out as Maddie. I also enjoyed that Maddie wasn't as snobby as I expected - Angela and Tiffany, her first two friends, aren't drama geeks; in addition, they don't end up being her only two friends. Maddie befriends one of the nice girls in the drama program, Sarah. I appreciated that Ms. Rae didn't only give Maddie two friends AND that it wasn't like Maddie, as the new girl, joined the friend group. Instead, she made her own. Still on the subject of Maddie, one of the things that kept me from completely loving What You Always Wanted and giving it 5 stars was that I wanted to see a little more character growth for her. She's a bit opinionated and she was rude to her parents and I wanted to see her grow and become more mature. However, she acted like a teenager in a lot of ways, which I did appreciate since so many YA protagonists seem way older than they actually are.
I liked how not everything went the way Maddie wanted it to, and she had to work for things. I would've liked to see the build-up to and her audition for the musical, though.
As for the romance, I appreciated that the problems weren't based on communication issues, as so many YA romances are. It was such a relief that there was no love triangle. And Jesse was definitely swoonworthy, y'all. He's an athlete and he dances and he's interested in Maddie. He makes an effort with her and even though he doesn't like old movies, he likes that she does and she's so passionate about her interests.
Language was mild - if there was any because I don't remember much. Kissing and making out were as far as it went.

The Verdict: So, so, so cute and sweet. If contemporary romance is your thing, then I'd be surprised if you didn't like What You Always Wanted.