I have not been to enough author events in the last year. There were a couple this semester that I really wanted to go to, but I never had a ride. I could've met Victoria Schwab and Gwenda Bond and seen Marissa Meyer and Emery Lord otherwise. But just two days ago, I got to attend Anne Blankman's launch event here in Richmond.

It was held at Chop Suey Books, which is a used bookstore downtown. We got there a little early just as it started to sprinkle. Thankfully, we were inside before it began to pour. I saw Anne, her husband, and her daughter setting up, but I wanted to browse first. I got to look at the Hamiltome for a while which was great fun. 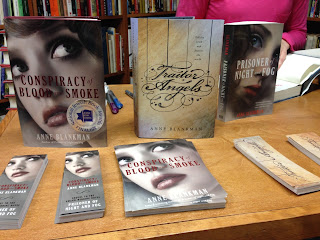 Then I went back and met Anne. She's been looking forward to meeting me, too, which really warmed my heart. I've interviewed her twice on the blog, and she's one of the authors I've supported for several years now. I got a hug and then she signed all six of my copies - ARCs and hardcovers. I brought Kelly with me; she's read Prisoner of Night and Fog and Conspiracy of Blood and Smoke but not Traitor Angels, so she purchased that one and got it signed. We both got a ton of swag, too. 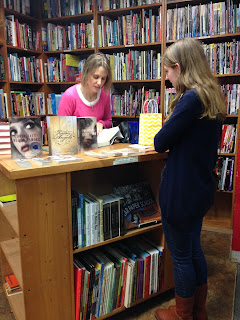 There were snacks, too. 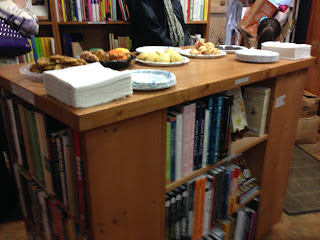 Author events with food are the best.

It was so great to talk to Anne. I'm always so awkward with authors, but she made me feel at ease and we talked various other books (particularly which ones I was reading on Saturday). There was also a reporter there who ended up asking me some questions, and I tried to be very professional. Overall it was a good day, and I'm gonna see Anne again in a month at a YA author event in Richmond (Sara Raasch is going to be there, too, which I'm super psyched about). 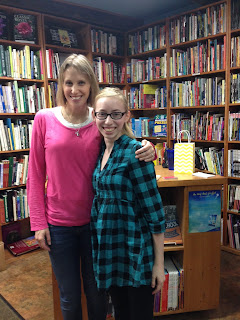 I got to check another author off my bucket list, and her books are definitely ones you should check out. Prisoner of Night and Fog gave me a major book hangover the first time I read it.