Review: A Quiet Kind of Thunder 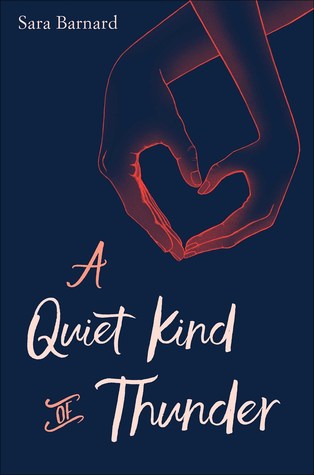 A Quiet Kind of Thunder by Sara Barnard
Grade: C+
An e-galley was provided by the publisher via NetGalley in exchange for an honest review.
Summary: Steffi has been a selective mute for most of her life. The condition’s name has always felt ironic to her, because she certainly does not “select” not to speak. In fact, she would give anything to be able to speak as easily and often as everyone around her can. She suffers from crippling anxiety, and uncontrollably, in most situations simply can’t open her mouth to get out the words.
Steffi’s been silent for so long that she feels completely invisible. But Rhys, the new boy at school, sees her. He’s deaf, and her knowledge of basic sign language means that she’s assigned to help him acclimate. To Rhys, it doesn’t matter that Steffi doesn’t talk. As they find ways to communicate, Steffi discovers that she does have a voice, and that she’s falling in love with the one person who makes her feel brave enough to use it. But as she starts to overcome a lifelong challenge, she’ll soon confront questions about the nature of her own identity and the very essence of what it is to know another person.


The Good, the Bad, and the Ugly: I usually don't mind books where there isn't a significant plot - that's why contemporary is one of my favorite genres - but there were just enough things in A Quiet Kind of Thunder that kept me from loving it, apart from the quiet plot.
I really liked that Steffi had anxiety and selective mutism and Rhys was deaf. Deaf culture is so beautiful to me, and I appreciate that it's starting to be featured in more books. How the two of them got started reminded me a little of Eliza and Wallace in Eliza and Her Monsters, mainly because those two wrote notes instead of talking a lot and that's also how Rhys and Steffi communicated.
I liked Steffi all right; she didn't feel like a particularly special character. Rhys was also a bit bland. I would've liked more with Tem, Steffi's best friend. And I wanted some flashbacks with Steffi's stepbrother, so I would understand the emotion in that relationship.
Like I said before, there isn't really a plot. A Quiet Kind of Thunder was more about character growth and romance. Once again, that isn't a bad thing. I think I expected just a little bit more out of it, though. I would've liked just a little more focus on Steffi's part on her goals and desires when it came to university and career just because plenty of sixteen and seventeen year olds worry about those things. Also, at times, I felt Steffi spoke with more ease than the synopsis led me to believe. Of course I expected an arc to develop, so I figured she'd have fewer problems as the book went on, but it still didn't seem to be as much of an issue at the beginning.
More language than I anticipated. There's also a sex scene that was more descriptive than I was used to in YA, and then there was some underage drinking.

The Verdict: Not a terrible read by any means.