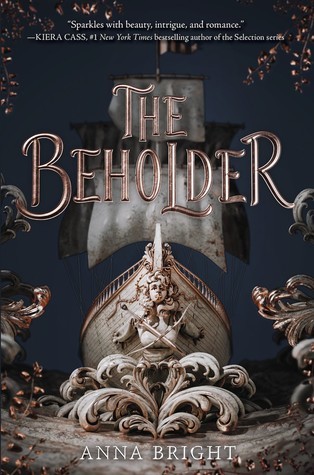 The Beholder by Anna Bright
Grade: B
Release date: June 4, 2019
An e-galley was provided by HarperCollins via NetGalley in exchange for an honest review.
Summary: Selah has waited her whole life for a happily ever after. As the only daughter of the leader of Potomac, she knows her duty is to find the perfect match, a partner who will help secure the future of her people. Now that day has finally come.

But after an excruciatingly public rejection from her closest childhood friend, Selah’s stepmother suggests an unthinkable solution: Selah must set sail across the Atlantic, where a series of potential suitors awaits—and if she doesn’t come home engaged, she shouldn’t come home at all.

From English castle gardens to the fjords of Norge, and under the eye of the dreaded Imperiya Yotne, Selah’s quest will be the journey of a lifetime. But her stepmother’s schemes aren’t the only secrets hiding belowdecks…and the stakes of her voyage may be higher than any happy ending.

The Good, the Bad, and the Ugly: Do you ever read a book and feel torn because you enjoyed it but also you know it probably wasn't the best thing ever? The Beholder bordered on simplistic at times, although that isn't necessarily a bad thing. A lot of books can get bogged down with complicated, unclear prose. I liked the main character, Selah, a lot. She's been raised as a future leader, and she wants to serve her people. She likes getting her hands dirty and doing behind-the-scenes work, which is admirable. I would've liked her interest in gardening to come through just a little bit more throughout the book, though! Her godmother sends soil and seeds for her aboard the Beholder, but she barely does any gardening after. And I would've liked her to be a little more active earlier on. She finds a bit of a backbone late in the book, and I wanted a little more of that to peek through earlier on. Make choices, girl! I know a lot of things were decided for her, but it felt like she was just moving through the plot at times.
If you enjoyed early YA books with love triangles and lots of fun romance, The Beholder is definitely for you. There's not really a love triangle. It's more Selah knowing her duty and being an open person who craves closeness so she warms up to those around her easily. In my opinion, there are three contenders at the moment, but it's clear by the end who Selah prefers, so we'll see what comes of that plotline in book two. (It's a duology, which I think is a great idea.) However, things do feel a bit insta-lovey. She only spends two weeks in each place, and especially in Norge, she and her suitor fall in love pretty fast. Obviously there's a need for urgency, but...love? That soon?
I really wanted to get to know the crew just a little better. Selah seems to care for them, but I'm just kind of a shrug emoji when it comes to them. I remember names but I barely remember who they are. One of the crew members comes ashore at one location, but not the location before and I honestly had forgotten about him.
The Beholder is set in a world clearly inspired by our own. Potomac corresponds with northern Virginia/Washington, D.C. area most likely, and then there are kingdoms and empires like the U.K., Norway, Russia, Germany, Italy, China, etc. The book is fantasy because it's not historical fiction but it clearly has roots in our world. I both liked and disliked how closely tied our world's tales and lore were to Selah's world. It felt a little weird because, on the one hand, her story is definitely Cinderella meets The Odyssey, but then there are characters named Homer (who tells the legend of Odysseus), Perrault (as in Charles), and Andersen (as in Hans Christian). So I'm not sure the marriage of the concepts worked as well as the author hoped. I also would've liked a clearer idea of the time period. They never take cars, but the voyage across the Atlantic goes pretty quickly and the way characters act seems kind of modern yet maybe inspired by the last 150 years or so.
If you had trouble with the rebels plot in The Selection, you might dislike a similar plotline in The Beholder. I do have hopes it'll prove stronger here, though, and have more of an impact in book two, based on where this book ended.

Content warnings: honestly, nothing I can think of. There's some making out but it's all very tame.

The Verdict: I liked it! But it wasn't anything groundbreaking.

Buy: Read Between the Lynes  Barnes & Noble
Will I be adding this book to my library?: Most likely!
Posted by Emma at 12:00 AM
Email ThisBlogThis!Share to TwitterShare to FacebookShare to Pinterest