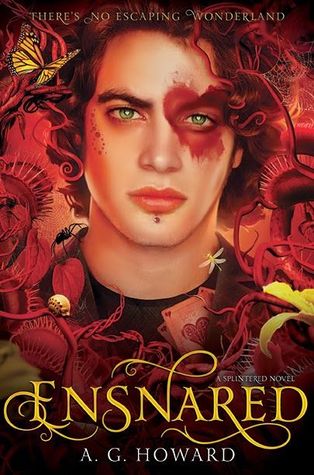 Ensnared by A.G. Howard
Grade: B
This ARC was provided by Read Between the Lynes in exchange for an honest review.
Summary: After surviving a disastrous battle at prom, Alyssa has embraced her madness and gained perspective. She’s determined to rescue her two worlds and the people and netherlings she loves. Even if it means challenging Queen Red to a final battle of wills and wiles . . . and even if the only way to Wonderland, now that the rabbit hole is closed, is through the looking-glass world—-a parallel dimension filled with mutated and sadistic netherling outcasts.
In the final installment of the Splintered trilogy, Alyssa and her dad journey into the heart of magic and mayhem in search of her mom and to set right all that’s gone wrong. Together with Jeb and Morpheus, they must salvage Wonderland from the decay and destruction that has ensnared it. But even if everyone succeeds and comes out alive, can they all truly have their happily ever after?

The Good, the Bad, and the Ugly: What an adventure Ensnared was. It was what I expected and yet very much not. If you haven't read Splintered and Unhinged in awhile, you may want to do a quick reread before you dive into the third book. I hadn't read either in months and there were a few things I felt a bit lost on. However, A.G. Howard does a good job of reviewing many key plot points without seeming tedious. It helps that Ensnared is just as twisted and creepy as the first two books in the trilogy. Wonderland is not a light, happy place.
Alyssa isn't the girl we met in Splintered. Her choices are rarely selfish, and she's very much human despite her netherling side (well, for most of the book considering something that happens 75% of the way through. She tries her best to outsmart the tricky netherlings and come out on top. I promise to spoil nothing in this review, but let's just say Alyssa meets a much happier fate than many YA heroines these days. Jeb, however, is a character that changes dramatically. Wonderland has made him a much different young man, and after Ensnared, I'm still not Team Jeb. Morpheus is twisted and manipulative, and I believe he's the character who has changed the least. He remains relatively the same in Ensnared as he was in Unhinged but that's not a bad thing. He isn't technically human, so how should we expect him to grow and mature?
My main problem with this final installment, however, lies with the plot. I'm pretty certain the majority of Ensnared takes place over about a week or less. Much of that time is spent, not in action, but planning, or brooding, or Alyssa moping because Jeb is being an idiot (albeit, an idiot because of Wonderland, but he's still being kind of stupid). I needed more action from this book and more scenes in Wonderland with Alyssa's mom, Alison, and Queen Ivory because they seem pretty awesome.
The love triangle resolves quite nicely, and it was good to see Alyssa own up to her feelings and do it in a way that I don't believe many other YA heroines have. I feel pretty happy with that ending.
Language was pretty clean. Violence and gore, not as much. Romantic content never fully crossed any lines but some conversations got pretty hot and heavy, in my opinion at least.

The Verdict: A satisfying trilogy ender. The Splintered trilogy is good for fans of Dorothy Must Die, The Madman's Daughter, and Shadow and Bone.