So I've never really been the girl who went all swoony over cute young male celebrities. I've never liked Justin Bieber, and the Jonas Brothers were just okay, and I'm not a Directioner. But I think fame love stories can be really cute and fun, so that's why I agreed to this guest post. 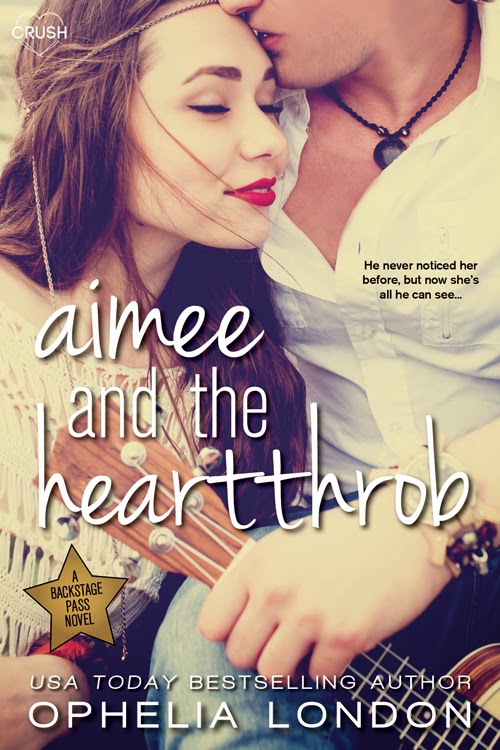 He never noticed her before, but now she’s all he can see…

Miles Carlisle is every teen girl’s fantasy. His rugged good looks and exotic British accent have helped catapult his boy band, Seconds to Juliet, to super-stardom. But after two disastrous and very public breakups, Miles isn’t interested in dating just any girl; he wants The One. And the only girl he’s interested in is not only his best friend’s little sister―and off-limits―but won’t even give him the time of day…

As a kid, Aimee Bingham had a huge thing for Miles…until he made fun of her for always tagging along. Now that she’s outgrown both him and her pigtails. the prospect of spending two weeks on tour with the childhood crush who broke her heart isn’t exactly enticing. Except now Miles seems interested. Very interested. And no matter how hard Aimee tries to resist him, her crush is definitely making a comeback.

USA Today bestselling author Ophelia London was born and raised among the redwood trees in beautiful northern California. Once she was fully educated, she decided to settle in Florida, but her car broke down in Texas and she’s lived in Dallas ever since. A cupcake and treadmill aficionado (obviously those things are connected), she spends her time watching arthouse movies and impossibly trashy TV, while living vicariously through the characters in the books she writes.

I’m the 5th of 6 kids, and mindless TV watching was very big in my house growing up. The Brady Bunch had already stopped being filmed a million years before, but it was still played like 5 times a day, right after I got home from school, and my older siblings loved it. I remembering being completely smitten with Greg Brady and his super-groovy 70’s clothes, dreamy blue eyes and curly dark hair. Hey, I was like 6, okay! But the crush never went away, and apparently I wasn’t the only one.
When The Brady Bunch was in its hay day, every girl on the planet was in love with groovy Greg. He was the Harry Styles of the mid-seventies. And yeah, he SANG, too. Maybe 5 episodes featured a singing Greg, but those were always my favorites, even though he was a pretty horrible lip syncer, he was still a total babe.
Years later, Barry Williams (the actor who played Greg Brady) wrote a book called Growing Up Brady, and went on a book tour. He happened to come to my town and I scored a ticket to his sold-out event. Okay, yeah, so he was like way old, but dude, I was in heartthrob heaven! At one point, he dressed up in one of his groovy outfits, sang a song and even invited a few lucky fans on stage to do the infamous “Keep On, Keep On” dance. Yes, I was one of them. And I was pretty much wetting my pants with joy. But that wasn’t even the best part. He stayed for hours so each of us could meet him, shake his hand and score an autograph. I did all of the above, plus, I asked if I could kiss him. Which I did. Aaaaaand, my friend snuck a picture of it.
Anyway, my point is, I’ll probably always love Greg Brady and meeting my first childhood heartthrob crush was better than I could’ve hoped. So, dream big, guys! And while you’re at it, grab Aimee and the Heartthrob, and then watch this clip of Greg Brady singing. It might be just me, but he’s still hot.

You can find Ophelia London and her books at the following links. And thank you to Entangled Publishing for inviting me to host Ms. London!
Ophelia's website: http://ophelialondon.com/
Ophelia's Twitter: https://twitter.com/ophelia_london
Ophelia's Facebook: https://www.facebook.com/pages/Ophelia-London-Author/235557139857428?ref=hl
Aimee and the Heartthrob on Goodreads: https://www.goodreads.com/book/show/24763293-aimee-and-the-heartthrob
Aimee and the Heartthrob at Barnes & Noble: http://www.barnesandnoble.com/w/aimee-and-the-heartthrob-ophelia-london/1121455758?ean=9781633752559
Posted by Emma at 12:00 AM
Email ThisBlogThis!Share to TwitterShare to FacebookShare to Pinterest