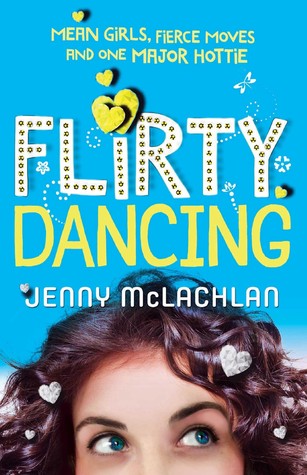 Flirty Dancing by Jenny McLachlan
Grade: C
Release date: April 28, 2015
This e-galley was provided by Feiwel & Friends and NetGalley in exchange for an honest review.
Summary: Full of humor and heart, this story of finding your confidence (and your jive!) is the first in a four-book series, The Ladybirds, by debut author Jenny McLachlan!
Bea Hogg is bullied regularly by her former best friend Pearl, so going to school isn't the best or favorite part of her day. As Bea leaves home each day, happy and light, she turns inward and becomes quiet, shy Bea for school.
When it’s announced that a prominent dance competition show is coming to their school, Bea is dying to compete. However, Bea’s best friend Kat ditches her for Pearl’s dance crew the Pink Ladies, and oddly enough, Bea finds herself paired with Ollie—the cutest guy in school (and the object of Pearl’s affections). Bea’s life is transformed as she finally gets her time in the spotlight. She overcomes her shyness, learns how to jive, and gets her first kiss!

The Good, the Bad, and the Ugly: Flirty Dancing was cute and fluffy, but ultimately, I had too many problems with the narrative and characters. For a story that had a fairly young voice, there was a fair bit of foul language - nothing more than PG, but it was still surprising. This was also a very short book, so I don't think I got to know the characters as well as I wanted to. The narrative was very plot-focused. I didn't connect with the story as much as I would've liked to, and the more I think about it, I just wasn't a big fan. I'm pretty darn sure Flirty Dancing is set in England, yet the book mixes British and American slang and terms (Bea's year is called freshman, when I'm fairly certain Brits don't use that term...). I kind of liked Ollie and Bea, but at the same time, I found their relationship to be very cliche. I wish I had more to say, but I don't.

The Verdict: Perhaps give this one a try through your local library, but otherwise, it's probably not worth your time.

Buy: Read Between the Lynes  Barnes & Noble
Will I be adding this book to my collection?: Most likely not.
Posted by Emma at 12:00 AM
Email ThisBlogThis!Share to TwitterShare to FacebookShare to Pinterest