Review: The Icing on the Cake 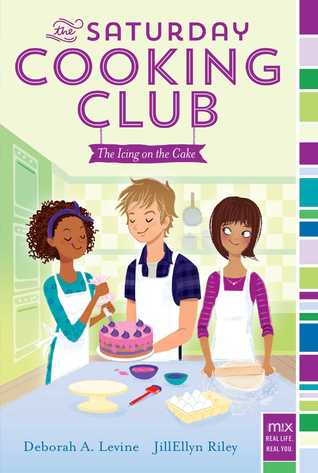 The Icing on the Cake (Saturday Cooking Club #2) by Deborah A. Levine and JillEllyn Riley
Grade: B
Release date: September 22, 2015
An e-galley was provided by Aladdin via Edelweiss in exchange for an honest review.
Summary: Turning thirteen isn’t looking lucky for Liza—and even the kitchen isn’t a refuge—in this second book of the Saturday Cooking Club series.

Liza’s big plans for a small birthday celebration with besties Frankie and Lillian don’t stand a chance against a guilt-giving force of nature: her Nana Silver. As the girls attempt to regain control from a grandmother with way-too-grand ideas, they also try to find the right recipes for their own happiness. Frankie decides to remake herself in the image of Lillian’s high-achieving, “perfect” sister Katie, while Lillian tackles the puzzle of how to understand boys. And Liza whips up plans to use Nana’s extravagant birthday bash to try get her parents back together—despite the obvious simmering between her mom and Chef.

Can the girls rise to the occasion and salvage Liza’s party without scorched feelings? Or will turning thirteen be far from a piece of cake?

The Good, the Bad, and the Ugly: This is the sequel to Kitchen Chaos, the first Saturday Cooking Club book was which very fun and reminiscent of The Mother-Daughter Book Club in a lot of ways for me. I really enjoyed Kitchen Chaos, so I hoped The Icing on the Cake would be just as good. It was - but I have a few problems to critique.
In the first book, Frankie, Liza, and Lillian evenly share the chapters (at least, I think they did). This book was much more Liza's story so she dominated the narration. This wasn't necessarily bad, but I wanted more of Frankie and especially Lillian. Also, Frankie had the B-plot and I felt it was dealt with too easily and quickly. She seemed to be on the verge of an eating disorder, and that wasn't dealt with realistically. Also, one of my favorite parts of the first book was the actual cooking classes and those were skimmed over more this time which was sad. I love hearing about cooking and baking! This book focused more on baking and sweets, which is my forte and I wanted more of that.
So hopefully this series will continue, and the next books will showcase Frankie and Lillian more - and more of the cooking classes!

The Verdict: Totally a series for fans of The Mother-Daughter Book Club by Heather Vogel Frederick. Make sure to check out the first book, Kitchen Chaos!

Buy: Read Between the Lynes  Barnes & Noble
Will I be adding this book to my library?: I hope to!
Posted by Emma at 12:00 AM
Email ThisBlogThis!Share to TwitterShare to FacebookShare to Pinterest